The following story appears on the CTV web site at http://www.ctv.ca

I know that I've written a lot about Mike Fisher but this story just re-enforces what I feel about him. He's a caring, young man who has life in perspective.

There's a video clip on the CTV site as well. Perhaps you can check out their site and find the link. It will move you to tears.

Three-year-old Elgin Fraser ended his battle with cancer just hours after he watched his favourite team, the Ottawa Senators, win a place in the Stanley Cup finals.

Propped up on a mattress in front of the television, Elgin closed his eyes and drifted away Saturday evening as his parents Hamish and Victoria Fraser held him tight.

His aunts, uncles and grandparents were there to say goodbye and how much they would miss him.

"He was okay with it and there was no fear in him. He was so calm to go," Victoria Fraser told CTV News. "He was a gift to us. Yes, I'm sad that he's gone, but he was a gift and he wasn't ours to keep."

Elgin died of a rare form of childhood cancer that affects the nervous system called neuroblastoma. He was diagnosed with cancer at the age of nine months. His tiny body went through numerous radiation treatments, chemotherapy and a stem cell transplant, which pushed the disease into remission.

After a year, however, the cancer returned in the form of a tumour in his torso that spread to his spinal cord.

Thanks to mutual friends and supporters, the Fraser family was able to make some of Elgin's hockey dreams come true in his final few months.

Elgin, perhaps the most dedicated Senators fan under the age of five, became a fast friend of the team. 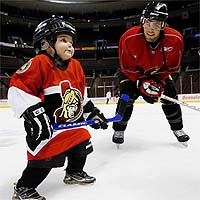 The Frasers were introduced to Sens defenceman Chris Phillips and were invited to a Senators practice in April, just days before the team's opening playoff round.

On Elgin's third birthday, Phillips dropped by the Frasers' home to play hockey with him.
The family was also able to attend every home playoff game through the generous donation of tickets from supporters.

Donning his customary Sens jersey and a sawed-off hockey stick, he watched the showdown with his family and later met with Sens centre Mike Fisher, goaltender Ray Emery and Phillips.

Phillips promised Elgin they would win their final game and make it to the playoffs for him.
His favourite player paid a visit to the Fraser home just two days before he died. 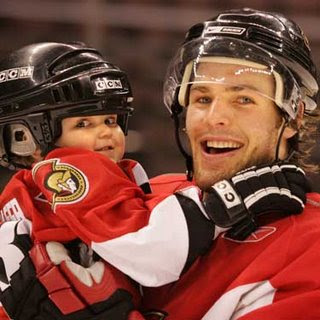 After Fisher received news of Elgin's death, he phoned the Frasers to say the Sens players would do their best to win the Stanley Cup for Elgin.

"He's just an awesome kid and he made a difference in my life," Fisher said. "I was thinking about him obviously through this series and through the week and we're trying to obviously win it for him."

Hamish was grateful for everyone's kindness towards his son. "For him to go out that way, with everything he's experienced in the last little bit, we have no regrets and the way he did go out was just perfect," he said.

Elgin's funeral will be held Thursday at 4 p.m. at the Carleton Place Arena.

The family is asking for any donations to be made to the Ottawa Neuroblastoma Research Fund, Roger's House or the Ottawa Senators Foundation.

With a report from CTV's Graham Richardson
Scribbled & posted by David Warren Fisher at Tuesday, May 22, 2007