I'm not one bit prejudiced or biased when it comes to Mike Fisher. Just kidding! I'm awfully proud of Mike to be honest!

Here's part of a story on Mike that I read on the ESPN web site tonight:

For the rest of the story, please click on this link: 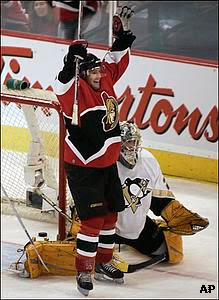 "(Mike) Fisher ended the 2006-07 campaign fourth in Senators scoring behind the big line of Daniel Alfredsson, Jason Spezza and Dany Heatley. The second-line center notched 22 goals and 26 assists in 68 games, the best offensive output in his career. He would have contributed more offense had he not missed 16 games in December and January with a knee injury.

Yet statistics don’t reflect the full value of the 6-foot-1, 213 pound center. Now entering the prime of his career, the 26-year-old native of Peterborough, Ontario has speed and tenacity to burn. But the key to Fisher’s game is his toughness. Fisher is both physically and mentally tough. He hits the ice with abandon and creates offense while providing outstanding defense.

On most nights he plays head-to-head against the top players on the other team and those opposing stars have to be aware of Fisher because he is strong without the puck and creates offense once he gets the puck back.