We've often sung the old chorus, He Owns the Cattle on a Thousand Hills. I've heard people who were in dire need add a different second line that goes something like this, "But who needs a cow right now?"

Last night before finally getting to sleep I was reading an excellent book entitled Absolutely Sure by Steven J. Lawson published by Multnomah Publishers. Towards the end of the book, Lawson relates the following story. It brought tears to my eyes as I read it to Carol. 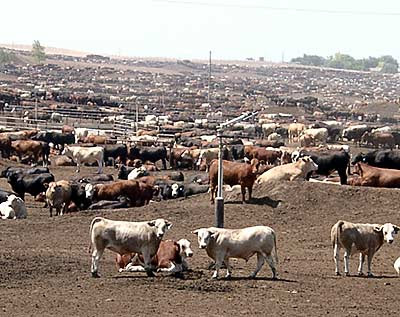 Shortly after Dallas Theological Seminary was founded in 1924, it almost folded. It came to the point of bankruptcy. All the creditors were ready to foreclose at twelve noon on a particular day. That morning, the founders of the school met in the president’s office (Dr. Lewis Sperry Chafer) to pray that God would provide. In that prayer meeting was Harry Ironside. When it was his turn to pray, he said in his refreshingly candid way, “Lord we know that the cattle on a thousand hills are Thine. Please sell some of them and send us the money.”

Just about that time, a tall Texan in boots and an open-collar shirt strolled into the business office. “Howdy!” he said to the secretary. “I just sold two carloads of cattle over in Fort Worth. I’ve been trying to make a business deal go through, but it just won’t work. I feel God wants me to give this money to the seminary. I don’t know if you need it or not, but here’s the check,” and he handed it over.

The secretary took the check and, knowing something of the critical nature of the hour, went to the door of the prayer meeting and timidly tapped. Dr. Lewis Sperry Chafer, the founder and president of the school, answered the door and took the check from her hand. When he looked at the amount, it was for the exact sum of the debt. Then he recognized the name on the check as that of the cattleman. Turning to Dr. Ironside, he said, “Harry, God sold the cattle.”

And, by the way, God still sells cows today!
Scribbled & posted by David Warren Fisher at Wednesday, May 09, 2007