The following post is reprinted in its entirety from Rebecca Stark's excellent blog entitled Rebecca Writes. She has been featuring hymns written by William Cowper in her Sunday postings. This has been particularly interesting for me as I visited the town of Olney while I was in England earlier this year. I purchased a copy of the Olney Hymns at the Cowper Newton Museum. 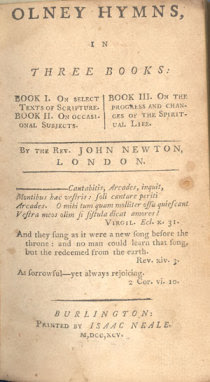 I’ve featured John Newton’s hymns here before, but today I’m presenting one more because I want to post a little bit about Olney Hymns, a hymnal published in 1779 that contained hymns written by William Cowper and John Newton. Shortly after Cowper’s conversion, John Newton became his pastor when Cowper moved to live in Olney. They shared a close relationship that continued after John Newton moved from Olney to take over a new pastorate thirteen years later.

From John Piper’s book, The Hidden Smile of God:

Newton saw Cowper’s bent to melancholy and reclusiveness and drew him into the ministry of visitation as much as he could. They would take long walks together between homes and talk of God and his purposes for the church. Then, in 1769, Newton got the idea of collaborating with Cowper on a book of hymns to be sung by their church. He thought it would be good for Cowper’s poetic bent to be engaged.1

As it turned out, Cowper wrote 68 of the hymns included in the Olney Hymns before he suffered another mental breakdown, and Newton finished things off by contributing more than two hundred. The previously featured hymns by Cowper were all Olney Hymns, and so was the ever popular Amazing Grace by Newton.

The breakdown that Cowper suffered was a bad one, and once again he tried to commit suicide repeatedly. Newton, Piper writes, “stood by him all the way through this, even sacrificing at least one vacation so as not to leave Cowper alone.”2 You get a glimpse there, I’d say, of John Newton’s pastoral heart. When Newton left Olney, he kept in close touch with Cowper, and the two men exchanged frequent letters for the next twenty years.

This hymn by Newton from Olney Hymns is one I was unfamiliar with, but it is in my church’s hymnal. I love it’s cross-centered words.

I Saw One Hanging on a Tree

I saw One hanging on a tree,
In agony and blood,
Who fixed His languid eyes on me,
As near His cross I stood.

O, can it be, upon a tree,
The Savior died for me?
My soul is thrilled,
my heart is filled,
To think He died for me!

Sure, never to my latest breath,
Can I forget that look;
It seemed to charge me with His death,
Though not a word He spoke.

My conscience felt and owned the guilt,
And plunged me in despair,
I saw my sins His blood had spilt,
And helped to nail Him there.

A second look He gave, which said,
“I freely all forgive;
This blood is for thy ransom paid;
I die that thou mayst live.”

Thus, while His death my sin displays
In all its blackest hue,
Such is the mystery of grace,
It seals my pardon too.

David's note: Although Rebecca wasn't familiar with this hymn, it's one that I learned many years ago. We would often sing it during our Breaking of Bread service (Communion) in our Brethren assembly.
Scribbled & posted by David Warren Fisher at Sunday, May 20, 2007