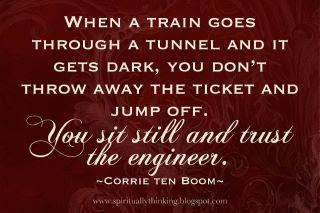 When everything is dark and uncertain around you...trust the One who knows all about you and "does all things well."

He is in control and He will bring you through.
Scribbled & posted by David Warren Fisher at Saturday, June 30, 2012 2 comments:

Any guy who experiences his first date as a thirteen-year-old is destined for disappointment. At least that was my heartbreaking introduction to the dating game.

The summer of ‘59 ended and I became a celebrity for a day or two. On Labour Day morning I won the Senior Championship of the Soap Box Derby run on the Hunter Street hill in East City.

My photo graced the Peterborough Examiner on my first day of High School at PCVS. I was a hero or so I thought. That self-inflated bubble was soon to burst.  Things continued downhill from there.

Helen Hotchkiss and I had gone roller skating at the Memorial Centre during the summer but this would be my first venture into a Christian venue with a pretty girl by my side. Boy, was I in for a surprise!

The Youth for Christ Rally in September of ‘59 featured a black and white “Christian” movie entitled Teenage Rock. To encourage other teens to attend I made up some posters and taped them to the side of my Grade 8 graduation gift, a brand new bicycle. Try to picture a tall, skinny, red-haired, buck-toothed Christian geek pedaling around town with hand-made movie posters stuck to his bike. Weird! I was trying to do my part to evangelize the hell-bound, sinful, God-forsaking teens in our city.

The long-awaited evening came and Helen Hotchkiss was going to be paraded before my friends. Yes, I actually had a girlfriend and everyone would be surprised…and envious. Helen and her sisters were going to be on the program at the YFC rally, the much-acclaimed Hotchkiss Sisters Trio. I was dating a celebrity!

I arrived early, anxious to get a seat near the front where everyone would see me. Helen was nowhere to be found. Finally as the Rally was about to begin the Hotchkiss Sisters made their entrance, sat in the front row and the fun (???) began.

This shy, backwards beanpole was too scared to get up from his seat and sit with the girl of my dreams. I sat alone and gazed on this beauty. As she and her sisters harmonized, I agonized. They would sing another “package” before the flick began. Did Helen even remember that I was her date? Did she even care? Did she even know I was there?

The talented trio musically prepared our hearts for the movie and as they descended the PCVS stage, the lights dimmed and we were in total darkness. Teenage Rock began and I sat alone, dejected and broken-hearted.

Afterwards when I got the nerve to ask Helen why she didn’t sit with me she used the lame excuse that she couldn’t find me in the dark. Sure! Likely story! How can you miss a 6’ 5” redhead sitting near the front?

Now, fifty years later I chuckle at the ineptitude and naivete that was “me” as a teen.

Over forty years later Joshua Harris would pen a book entitled “I Kissed Dating Goodbye”. I could have waxed eloquent on the subject in the Fall of ’59.

Helen and I never dated again. Ten years later this Pentecostal cutie married another “brethren” piano player, who was just as geeky as I was and moved out of town.

I’ve never seen her since.

I'm still in the dark.

NOTE:  The names in this story have been changed to protect the guilty.

ANOTHER NOTE:  If we can't laugh at ourselves we have a problem.  As I recall this true story from time to time...I can't help but chuckle to myself.
Scribbled & posted by David Warren Fisher at Tuesday, June 26, 2012 No comments:

GOD ON A HIGH WIRE

Did you hear that tightrope walker
as he crossed Niagra Falls? *
Did you hear Webb Simpson doing much the same? **
At the foggy U. S. Open or amid Niagra's mist,
you could hear those young men praising Jesus' name.

When your faith is more than prayer beads
that you finger once a day
or the place you spend an hour once a week,
then it has a way of springing
from that well deep down inside
and impacts the way you live and how you speak.

When you love the Lord you're serving,
when King Jesus owns your heart,
when you seek his kingdom faithfully each day,
then your faith's not dull religion
or list of endless rules
it's a source of joy that shows in what you say.


* For a link to ABC 20/20 to watch Nik Walende's high wire stunt and hear his unedited praise of God go to...  http://www.elijahlist.com/words/display_word.html?ID=11122

** For a link to a Christianity Today article about Webb Simpson's public witness to his faith go to...  http://blog.christianitytoday.com/ctliveblog/archives/2012/06/webb_simpson_go.html
Scribbled & posted by David Warren Fisher at Friday, June 22, 2012 No comments: 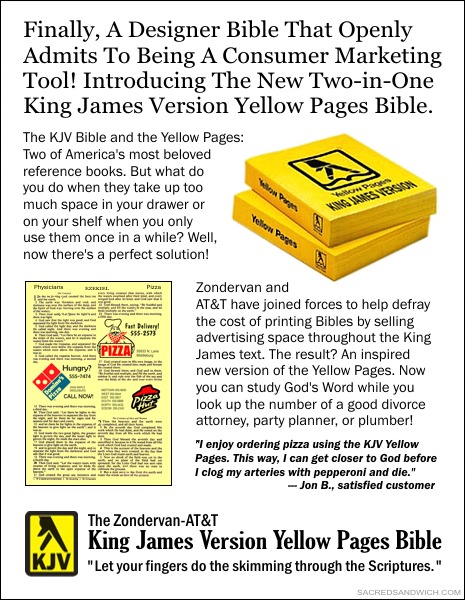 Before you comment telling us how ridiculous this is, be assured that there isn't any such thing as this KJV/Yellow Pages combo.

But, knowing what's on the market these days, it wouldn't surprise me if this showed up soon.

Hopefully you won't see it in Christian bookstores and other retail outlets any time soon.
Scribbled & posted by David Warren Fisher at Wednesday, June 06, 2012 1 comment: 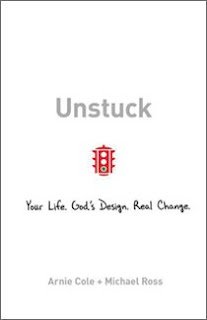 What is your response when asked how your "Christian walk" is progressing? If quizzed on your "devotional life" do you squirm and dig deep for an answer which may not be 100% true but might satisfy the one asking the question and prevent embarrassment to yourself?

Does God's Word speak to you in profound ways when you read it or do you "go through the motions" because it's your obligation as a Christian believer? Do you encounter God when you read?

Every so often you come across a book that challenges you to the core and causes you to realize that you might be a spiritual "loser". UNSTUCK is such a book! Even though I was challenged to the core, I couldn't put the book down and when I did...kept coming back for more.

One of the authors, Dr. Arnie Cole, confesses, "At least I know my topic inside and out. I've lived most of my life spiritually stuck. or, as I like to call myself, a spiritual loser." That confession struck a chord with me.

The beauty of this new book is that the authors, Dr. Cole and Michael Ross, speak in terms that I could relate to. They are transparent, non-judgmental and understanding of the human condition. They know what it's like to feel stuck.

They speak of Bible "engagement", something that many Christians including me struggle with. We read the Bible, often out of guilt, but God's Word doesn't penetrate to our heart, we don't allow it to speak to us and we read much too casually, not remembering that the Bible is "God-breathed" and is profitable for "doctrine, reproof, correction and instruction in righteousness."

UNSTUCK challenges the reader throughtout, not by making us feel guilty but giving us hope that change is possible and a real realtionship with God through Jesus Christ can be a reality not just an expression we use.

The authors, both on staff at Back to the Bible, don't use formulas to give answers but share over a 45-day period how we can interact with God through His Word and finally get unstuck. Cole and Ross have done their homework having conducted extensive research into the habits and lifestyles of professed Christians. Sad to say, they discovered that many believers have a listless, second-hand faith. They furnish us with positive ways to revitalize our faith, encounter Scripture each day and finally...connect with the God who created us and knows everything about us.

We can get unstuck and begin to enjoy a meaningful relationship with God. Arnie Cole and Michael tell us how.

This book is a "must-read" for everyone who wants more of God and is tired of being a 'spiritual loser."

This book has been provided courtesy of Baker Publishing group and Graf-Martin Communications, Inc. Available at your favourite bookseller from Bethany House, a division of Baker Publishing Group.
Scribbled & posted by David Warren Fisher at Wednesday, June 06, 2012 2 comments:

The Kawartha Komets celebrated another successful season (our 3rd) on Sunday at the Lions Centre in Peterborough.

A crowd of approximately 135 in the Komets "family" enjoyed a delicious meal catered by one of our sponsors, East Side Marios.

All 45 players received trophies to acknowledge and recognize their contributions to the Komets,

NHLer Kurtis Foster was on hand to sign autographs and speak to the group.

Our dedicated team of coaches and volunteers was recognized and thanked for their faithful commitment to the team.

Thanks to everyone who made the 2011-2012 season another successful one.

Be sure to check out the Kawartha Komets Facebook page from time to time!
Scribbled & posted by David Warren Fisher at Sunday, June 03, 2012 No comments: