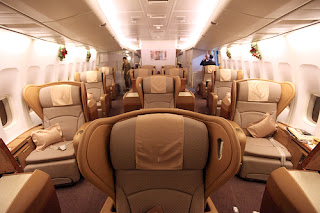 My friend Paul Wilkinson posted this moving account on his Thinking Out Loud blog today.  It bears repeating!  Who did you or will you bless today?

Sometimes life hands you an opportunity to do something nice for people, and all you can do is stand back and watch it unfold. Barbara and I were returning home from California last week and were upgraded to first class. What a blessing! But that blessing lasted just a few moments before we saw an opportunity to do something even better. Better than first class? You bet.

As we waited to board our flight from Dallas/Ft. worth to Tulsa, we heard our name called over the speaker, requesting us to come to the check-in desk. The agent told us that they would like to move us to first class in order to keep another family together on the plane. I said to the agent, “Alexis, you are our new best friend.” She smiled, handed us our tickets and said we could board the plane. Yep, first class, folks! We’re flying First CLASS!!

I can now tell you that, after spending the previous three hours sitting in the economy section with our backs against the restrooms in the tail of the plane, the first class seats are amazing. They are wide, comfortable leather seats, big enough to accommodate both of us in one seat if we wanted, and leg room for someone and a foot and a half taller. We sat down a little dazed at our amazing luck.

Now it was us who got to feel like rich, important people as the remainder of the poor economy class folks boarded the plane, looking us over to see if we might be a celebrity or a famous sports figure. At least, that’s what I do when I walk through first class.

We were in our seats for less than a minute when two servicemen walked by in their digital camouflage fatigues. As we watched them walk past us to the economy class, Barbara turned to me and said, “That’s not right.” I said, “I know. Wait until everyone is on board and we’ll call the flight attendant over.”

When the aisle cleared, I called over the nearest flight attendant and said, “We’d like to trade seats with those servicemen. They should be in first class.”

“That’s so sweeeeet,” the attendant said as she began to fan her face with her hand. “I think I’m going to cry.”

I said, “We were just upgraded to these seats and those two men should have them.” She looked at us for a moment, called over another flight attendant and they went back and informed the servicemen.

“You’re not going to be able to sit together,” one of the flight attendants told us.

“That’s okay,” I said. “They should have the first class seats.”

After we sat down in our new economy class seats, the man next to me said, “Nice move.”

I said, “Anyone willing to give up their life for me and my country deserves to have my seat in first class.” He nodded his head in agreement.

I must admit that I sat there a little stunned at what just happened. It is not every day that you get to do the right thing, in public, and do it in a way that strangers look at you with approval and admire your actions. I kept thinking about what the man next to me said. “Nice move.” No, I thought, the nice move is when two young men chose to join the armed services of their country when they don’t have to, and are willing to give up their life for their country and our continued safety. THAT is a nice move worthy of both admiration and approval. They are willing to give up their lives for me. All we did was give up two comfortable seats we didn’t even pay for.

A pastor I know likes to say, “You are blessed to be a blessing.” It seems Barbara and I were blessed with first class seats for about four minutes just so we could pass that blessing off to someone else. I encourage you to be aware of an opportunity to bless someone with something you have, no matter how temporary.  You never know Who might be watching and say, “Nice move.”
Scribbled & posted by David Warren Fisher at Tuesday, August 14, 2012 1 comment: 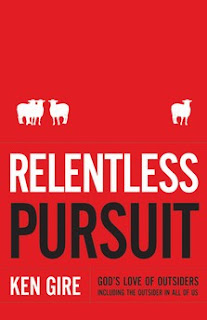 Author/Speaker Ken Gire has penned another thought-provoking book which challenges readers to step outside of their comfort zones to interact with “outsiders”.  Relentless Pursuit portrays “outsiders” as the poor, homeless, disabled, divorced, disenfranchised, marginalized segment of society that is often shunned and disregarded.


Gire shares biblical examples of those who could be categorized as “outsiders” including Christ Himself who was “despised and rejected by men, a Man of Sorrows, acquainted with grief.”  If our Master spent significant amounts of time with the prostitutes, thieves and prodigals of His day, shouldn’t we as His followers do the same?

We, in the Church, can make ourselves so comfortable with the insiders that we lose sight of those who struggle each day to survive.  We must go “outside the camp” with and for Him to listen to and care for those who’ve been forgotten by mainstream society.

Gire reinforces the fact that God is in relentless pursuit of us, all of us, because He created us and desires a relationship with us.  He includes the classic poetic work by Francis Thompson, The Hound of Heaven, which relates the Spirit of God’s pursuit of man and our efforts to shake Him off.  Thompson himself was an addict, an “outsider” who knew the shame of being out of the mainstream.

Gire admits his struggle with the story of the Good Shepherd leaving the ninety-nine sheep who were safe in the fold to rescue the lost one.  Why would He, Jesus, risk losing those who were insiders, safe at home, to find that one “outsider”?  Because of His deep, redeeming love!

In the midst of our hurt and shame, God welcomes us with all of our imperfections and invites us to eat at His table as redeemed “outsiders”.

Those readers who expect a “Systematic Theology” in every Christian book they read will be disappointed.  Detractors will say that Gire shares too many personal experiences and, in doing so, becomes too subjective.  I disagree.  I found myself relating to the author as he opened his heart and became transparent.

If you are content to enjoy your circle of “inside” friends and you’re hesitant to step outside to engage with the less fortunate and those often labeled and “undesirables” you might read a chapter or two then set the book aside.  But, if you are willing to take the risk and obey Christ’s call to go “outside”, you will see how rewarding it is to show love to the unlovely.

I’ve read several of Gire’s earlier offerings but connected with Relentless Pursuit on a deeper level.