It's that day of the year
when I'm glad I'm a dad
but I grieve that my own's not around.
And I wish I could tell him
how deeply he's missed
since we laid him six feet 'neath the ground.

I'd love him to know
that my girls have achieved
and have made godly choices in life.
How I wish he could meet
the young man who proposed
and will soon make my daughter his wife.

There is much I would ask him
about real estate,
how to broker a deal on a car,
when to liquidate assets
or buy struggling stocks,
how to read a long putt for a par.

Seems I took Dad for granted
and wrongly believed
he would always be there to ask how.
I deluded myself
thinking there would be time
even when cancer furrowed his brow.

And while I am grateful
for all that he did
(not the least was to teach me to pray),
I've a lump in my throat
and a knot in my gut
as I thank God for Dad this Sunday.

Greg's Note: My dad lost his 14 year battle to prostate cancer on November 4, 2008. I miss him more than words can say!


David's Note: My dad went "home" to be with Jesus on May 21st, 1992 after losing a brief battle to cancer.  Like Greg, I miss him dearly!  Life is sure different without a father.  Mine was the best!

Welcome to FRIENDS Peterborough, a local outreach of a program that began internationally in 1998.  We have been serving the people in Kenya, Brazil, India, the Sudan and other countries but now we are launching our program, giving people a "hands up" right here in our own city, Peterborough.
Here in Peterborough we want to help our "friends" any way we can. We will be available 5-6 days a week from 9:30 - 2:30 in a downtown location that we will announce as soon as negotiations are finalized.
We will lend a listening ear to those to need someone to talk to.  We will not solve the problems of those who visit us but we will refer them to the proper agencies, health care facilities, organizations, etc. that can best meet their needs.  We will be available to help seniors, new Canadians, young people, single parents...in fact, our arms will be open and our hands up...to lend assistance to anyone who comes through our doors.
We will reach out with an attitude of respect, giving dignity to a needy world.
OUR MISSION:
Our mission as FRIENDS is to be hands extended to those in need.  There are many people in our community that are deprived of the basic essentials.  As a humanitarian organization we will seek to provide help to those individuals.
OUR STAFF:
FRIENDS Peterborough is governed by a Board of Directors.  Working in conjunction with that Board will be three men initially.  We will add additional staff and volunteers as needed.
The three men who will co-ordinate the FRIENDS Peterborough program are Chanda Kaziya, Jim Duggan and David Fisher.
As soon as we have finalized our location we will be posting that information here on this site.
We welcome all our future "FRIENDS" to FRIENDS Peterborough!
FRIENDS is a not-for-profit charitable organization registered with the Canadian Revenue Agency.  Our registration # is 890961022 RR0001

Note from David Fisher:  FRIENDS Peterborough asked me to join forces with the two other staff members to help co-ordinate this new venture.  I will continue to write to and encourage athletes through Epistle Sports Ministries. 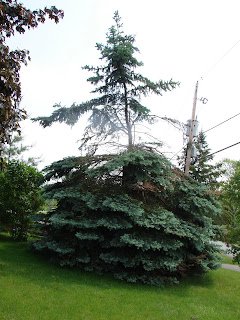 Wow!  What a storm!  Wednesday evening we were in town while the storm was raging and headed home after the winds died down and the rain quit pelting us.  As we drove along our country road we saw several trees that had either been blown over or hit by lightning.
As we pulled into our driveway we noticed that our largest blue spruce tree on the front corner of our lot looked a bit strange...like it wasn't "all there". 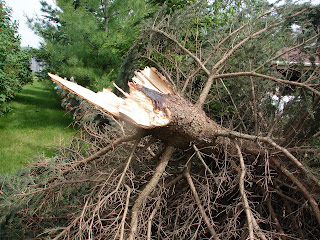 After getting out of the car and navigating around the basketball net which had blown over, we surveyed the tree from a different angles. The power was out and remained "out" for 24 hours.  Our kind neighbour has been busy cutting up the tree...as it landed in his driveway.
Thank God...we're back to normal now...whatever "normal" is!
Scribbled & posted by David Warren Fisher at Friday, June 10, 2011 No comments:

Over 35 years ago I wrote a note of encouragement to a young, promising catcher with the Montreal Expos, Gary Carter.

As a result of that initial contact I was invited to present Bibles to the entire Expos team in 1976, their last year at Jarry Park.  Almost the entire team attended the chapel service that Sunday morning and friendships were forged that have endured the test of time.

My friendship with Gary Carter is one of those that will last a lifetime.


Naturally we were saddened in the past week to learn that Gary has inoperable brain cancer.  Gary is a strong, committed Christian and has the support of his loving wife Sandy and their children and grandkids.
Please pray for Gary Carter!  THANK YOU.
Here is a recent article concerning Gary's condition:
The news keeps getting worse for Hall of Fame catcher and former Met Gary Carter.
Duke University doctors confirmed Tuesday that the 57-year-old Carter has inoperable Stage 4 brain cancer, but did mention paths of treatment.
Allan H. Friedman and Henry S. Friedman, co-deputy directors of Duke's Preston Robert Tisch Brain Tumor Center, said in a statement:
"The results of biopsies performed on the tumor in Gary Carter's brain have conclusively shown that Mr. Carter has a glioblastoma. While surgery is not a good option given the location of the tumor, we discussed an aggressive treatment plan with Mr. Carter and his family, which will include chemotherapy and radiation. ... Mr. Carter's youth, strong physical condition and fighting spirit will be to his advantage as his treatment commences."
The Hall of Famer was returning to his home in Florida to begin treatment.
Carter's family issued its own statement in conjunction with the Duke release: "While we are saddened by the news we received today, we take comfort in the overwhelming support and prayers that have been extended to our family during this difficult time. ... Gary was always a fierce competitor on the baseball field and that same tenacity will help him not only fight but win this battle. So please join Team Carter and continue to pray with our family."
Carter first learned of the original diagnosis of brain tumors on May 21. According to a Carter family website, the father of three spent Memorial Day relaxing by his hotel pool and spending time with his wife, Sandy, children and grandkids.
His daughter Kimmy Bloemers wrote on the family website: "When I was a little girl, I remember many many awesome memories with my family. One in particular was when dad would play a song called 'Break My Stride' by Matthew Wilder extremely loud throughout the house. When dad played that song, it meant it was time for the kids to dance with dad. That is dad's mission ... 'nobody gonna slow me down ... ain't nothin' gonna break my stride ... gotta keep on moving.' Dad has promised that he is fighting tooth and nail. He has and never will be a quitter. Dad is a fighter and a champion!"
Scribbled & posted by David Warren Fisher at Thursday, June 02, 2011 No comments: