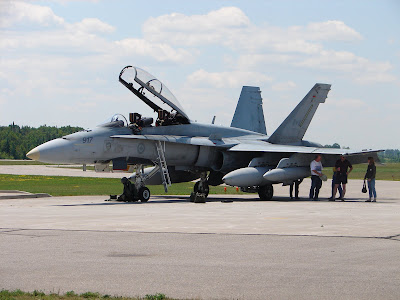 While driving home today I noticed an F18 fighter jet circling close to the airport (and our home). I picked up Nathan and went back to the airport to see if the jet had landed. It had! How exciting! I'm an airplane buff and I'd never seen a Canadian Forces jet at our airport before.

One of the pilots/captains came over to the fence where a dozen or so "flight fanatics" were standing and fielded questions from us. Jameel Janjua and the other pilot, Brandon Robinson, are stationed at CFB Bagotville, Quebec. They were doing manoeuvres and needed to refuel. 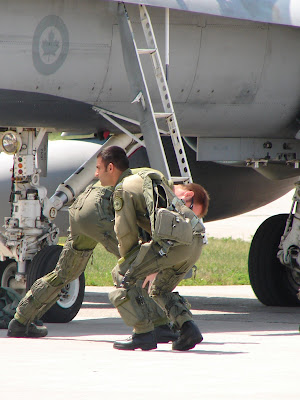 Brandon's parents live in the area so he radioed them to say they were refueling in Peterborough. His father is a pilot as well so his parents flew down in their private plane to meet him. They hadn't been together since Christmas.

Nathan and I drove home to get Matthew and my camera. I wanted to watch them taxi and take off. As the plane built up speed, the roar of the engines was deafening. Being a plane buff, and a NASCAR fan (by the way), the sound brought tears to my eyes.

We spoke with Brandon's parents after the F18 disappeared from sight. They were certainly pleased that they had a brief visit with their son over lunch.

The boys and I were grateful for a divinely appointed diversion in the middle of our day.