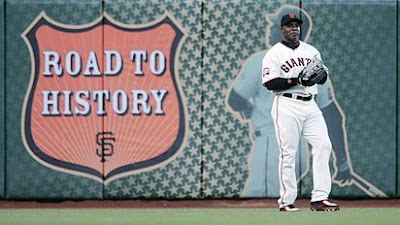 Now that I've turned 62 I'm realizing that I have crafted more baseball-related memories in the past than I will ever be able to make in my remaining years.

A year and a half after stepping away from my position with BASEBALL CHAPEL I find myself recalling literally hundreds of those memories...fondly. Yes, there's a book in the works but I have enough stories for a dozen volumes.
Often Carol and I will talk of the times that we were ministering together before we adopted the boys. We made many friends in the world of baseball...as a couple.
With all the talk in recent weeks about Barry Bonds' assault on Hank Aaron's home run record, I find myself thinking back to the time that Barry's dad Bobby Bonds was a friend of mine. Bobby passed away several years ago but we had many talks during his career. I can clearly remember the day in the visitors' clubhouse in Montreal when Bobby told me about Barry. He spoke as a loving and proud dad. Who ever would have thought that Barry would become such a prominent figure?
Now, as Barry approaches the record of 755 home runs, I find myself feeling old. Ancient!
I recall with fondness the night that Hank Aaron bested Babe Ruth's record of 714 homers. Hank had been my favorite ballplayer since I was a kid. How exciting to watch that 715th homer clear the fence!
The excitement won't be there when Barry hits his record-breaker! Sadly, the record will be tainted!
My fondest memory finds me kneeling in the kitchen with my mom when I was only 6 years old. That morning I welcomed Jesus Christ into my life and became a born-again Christian. Nothing can taint that memory! It's forever etched in my mind and I'll always be grateful for a godly mother who showed me the Way!
Well friends, I could go on and on but...there are so many other stories to be told and so little time to tell them.
Ask me about Tim Foli sometime...
"I have been young, and now am old, yet I have not seen the righteous forsaken or His children begging for bread." - Psalm 37:25 (ESV)
Scribbled & posted by David Warren Fisher at Tuesday, July 24, 2007