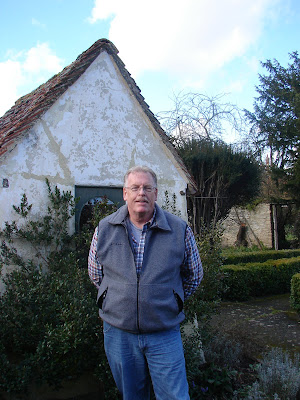 The following post was taken in its entirety from Lisa J's post over at Thoughts from the Teahouse (see link under Pilgrim Pals). As you may recall, I visited Cowper's home in Olney while I was in England earlier this year. The photo is of Cowper's Summer House where he did much of his writing. He'd also visit with John Newton there, receiving encouagement and hope from his friend. His life and his battles with depression have always been an interest of mine. Thanks for posting this, Lisa!

GOD MOVES IN A MYSTERIOUS WAY

God moves in a mysterious way
His wonders to perform;
He plants His footsteps in the sea
And rides upon the storm.

Deep in unfathomable mines
Of never failing skill
He treasures up His bright designs
And works His sovereign will.

Ye fearful saints, fresh courage take;
The clouds ye so much dread
Are big with mercy and shall break
In blessings on your head.

Judge not the Lord by feeble sense,
But trust Him for His grace;
Behind a frowning providence
He hides a smiling face.

His purposes will ripen fast,
Unfolding every hour;
The bud may have a bitter taste,
But sweet will be the flower.

Blind unbelief is sure to err
And scan His work in vain;
God is His own interpreter,
And He will make it plain.

In his biographical talk on John Newton, John Piper shared the following text about Cowper, preached at his funeral by John Newton. (originally from The Life of John Newton by Richard Cecil)

He drank tea with me in the afternoon. The next morning a violent storm overtook him. . . . I used to visit him often but no argument could prevail with him to come and see me. He used to point with his finger to the church and say: "You know the comfort I have had there and how I have seen the glory of the Lord in His house, and until I go there I'll not go anywhere else." He was one of those who came out of great tribulations. He suffered much here for twenty-seven years, but eternity is long enough to make amends for all. For what is all he endured in this life, when compared with the rest which remaineth for the children of God.