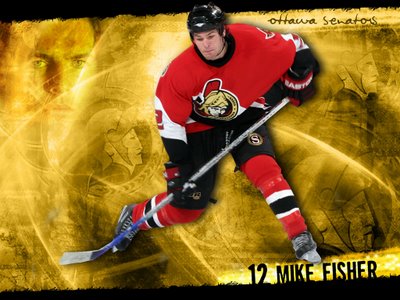 While browsing the Ottawa Senators' web site this evening I found some new desktop wallpaper for your computer screen.

This one looks looks especially attractive. I think I'll use it for awhile.

And, by the way, as I write this post, Mike has scored one goal and picked up two assists so far in the Sens' game in Toronto against their biggest rival, the Leafs.

Update: The Sens added another goal to defeat the Leafs 5-3 last night.

Here's a line from the CBC report:

"The Senators put the game away at 15:27 of the third when Fisher fed a gorgeous pass to Dean McAmmond who beat Tellqvist on a breakaway with a pretty backhander."