You Deserve a Medal!

People often say to Carol and me, "you deserve a medal"! It's usually in reference to our adopting two young boys at our advanced (?) age or the crazy schedules we both keep with volunteering, ministry and the regular duties of raising children and grandchildren. We just laught it off. Today I received a medal, well it's actually a medallion but I will cherish it forever. 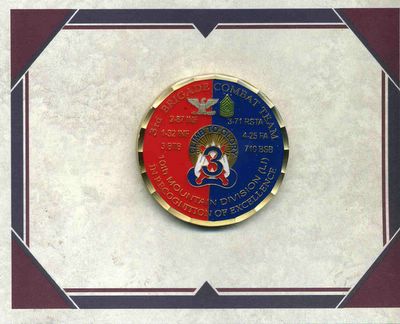 You Deserve a Medal


I had the distinct pleasure today of helping to co-ordinate the visit of some 90 soldiers and their sons from the army base at Fort Drum in upstate New York. Their chaplain, Charles Reynolds, arranged the trip in conjuction with Bryan Hickerson, the Baseball Chapel leader for the Chicago White Sox. Bryan couldn't make the trip at the last minute due to a funeral in Indiana so I picked up the ball and ran with it.

These troops spent the last couple of days doing "fathering" type activities. They had some seminars and did some other activities like an obstacle course at the base. They came up today in school buses to see the Jays/White Sox game. They arrived early and were ushered down to field level where a number of Blue Jay players interacted with them and signed autographs for the sons (and some dads too). The Jays' manager, John Gibbons, arranged for all the boys to get a genuine major league baseball which they got signed by the players.

It was my pleasure to pray with the troops and their sons, asking God to give them a great day, a safe trip back and to protect them when they are deployed to Afghanistan early next year. Six of the soldiers in uniform marched into the ballpark as the color guard just before the anthems were sung.

What a pleasure to meet these men and their sons and to watch the Blue Jays personnel interact with them. Before I left one of the soldiers gave me this medallion and, if you can read it, it says, "Climb to Glory". This is the medallion for the Spartans, the 3rd Brigade Combat Team, 10th Mountain Division. They gave me this as a token of their visit. It will remind me to pray for these men as they prepare to go overseas. Next month they will be in another part of America training before their deployment.

"Cimb to Glory"...that's what I'm going to do when Jesus calls me home. Until then I want to be "a soldier of the cross", telling others of His love.

It was a great day! Tomorrow I'm back to conduct the chapels for the two teams. What a privilege to lift up Jesus wherever He places me!
Scribbled & posted by David Warren Fisher at Saturday, May 07, 2005