Two Thumbs Up For Koskie

UPDATE...May 27th - Today's Toronto papers report that there was also ligament damage in Koskie's hand and the prognosis is now 6 - 8 weeks before returning to the lineup. More need to pray than ever! THANKS!

Corey Koskie has been a great addition to the Toronto Blue Jays' roster. He, along with Reed Johnson, serves as a Baseball Chapel player rep with the Jays. Recently Corey broke his thumb on a return visit to Minnesota where he had played all his major league career. Corey had surgery on his thumb yesterday (May 25th) and is expected to be out of the Jays' lineup for 4 - 6 weeks. 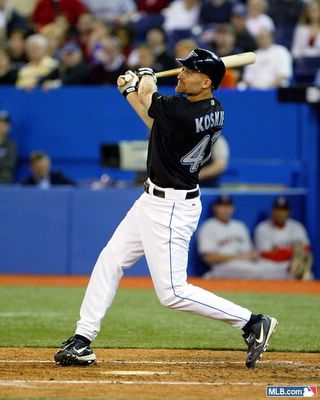 Please pray for a speedy and complete recovery for Corey as he heals from this setback. Pray too for his wife as she is expecting a baby real soon! Corey is such a critical component of the Jays' lineup and has been and will be an invaluable addition to our chapel program.

Thanks for your prayerful concern!

Scribbled & posted by David Warren Fisher at Thursday, May 26, 2005