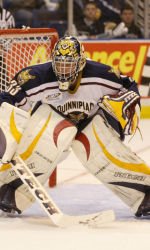 Bud Fisher (my nephew) led the Quinnipiac Bobcats to victory twice on the weekend against Robert Morris. On Friday night Bud stopped 43 shots en route to a 3-1 victory. Last night (Saturday) he was back between the pipes as the Bobcats won 5-1. Bud was the 3rd star Saturday night and had to settle for 1st star on Friday!

Great weekend for the Fisher boys as Mike scored in the shootout last night in Montreal to give the Sens a much-needed victory!
Makes an uncle proud!
Scribbled & posted by David Warren Fisher at Sunday, October 15, 2006