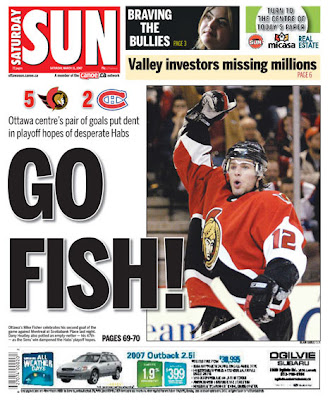 This morning's Ottawa Sun cover got me all excited and then I realized it was refering to my nephew, Mike Fisher, and not me. We're both "Fish" but when we're together Mike is LITTLE FISH and his uncle is BIG FISH.

Last night Mike passed his previous record for points in a season when he scored 2 goals and picked up a helper in the Senators' 5-2 win over the Canadiens. Mike now has 22 goals (tying last year's career high of 22) and 25 assists for 47 points. Last year Mike had 22 goals and 22 assists for 44 points in 68 games. This season he has amassed 47 points in 64 games with an opportunity to add to that total in the final four (4) games.
Do I sound like a proud uncle? Good! I am! I'll get to see Mike play in Ottawa against Jordan Staal and the red-hot Penguins next Thursday.
There'll be mixed emotions in that game but "blood is stronger than water" they say.
Scribbled & posted by David Warren Fisher at Saturday, March 31, 2007