Another Hero Has Gone Home

Yesterday I received word that one of my heroes had been called "home". Roger Bennett, pianist and songwriter, had battled a form of cancer for a number of years and God said "Enough!" to his suffering servant and beckoned him to heaven. Being a piano player myself who loves Southern Gospel music, Roger Bennett had always been one of my favorites. He joins the heavenly "Homecoming" choir made up of others like James Blackwood, Vestal Goodman, Jake Hess and Anthony Burger.


We'll miss you Roger! Thanks for the memories, dear brother!


Legacy Five pianist Roger Bennett died today as a result of complications encountered though his long battle with leukemia. He was 48 years old. 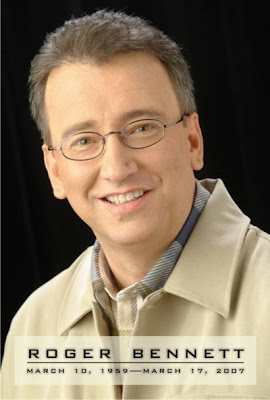 Born March 10, 1959, Roger grew up in Strawberry, Arkansas. In November of 1979, Roger fulfilled his life-long dream of being a part of professional Southern Gospel music when he was invited by Glen Payne and George Younce to join the legendary Cathedral Quartet. Though he would leave the group for two years (1987-1989) to serve as the president of Journey Records, Roger was the group's pianist at the time of the quartet's retirement in 1999.


Following the retirement of the Cathedrals, Roger and fellow Cathedrals member Scott Fowler launched Legacy Five. In 2004, Roger fulfilled another dream (having his own successful quartet) when readers of Singing News voted Legacy Five as the Favorite Traditional Male Quartet.


Although an excellent singer, Roger is best remembered as pianist-- and often a comedian--for the Cathedrals and Legacy Five. Roger received the Singing News Fan Award for Favorite Southern Gospel pianist 14 years in row (1993-2006).


Songwriting was another forte' of Roger Bennett. Many of his songs appeared on the recordings of the Cathedrals, Legacy Five and many others. His writing talent was not limited to just songs, however. Roger was a contributing editor to Singing News, writing "Midnight Meditations."


Roger leaves behind his wife (Debbie), their children (Chelsea and Jordan) and father (Doug). Funeral arrangements are pending.