My nephew Bud Fisher had a great weekend as the Quinnipiac Bobcats won both games and will play in the ECACHL tournament semi-finals this weekend. CONGRATULATIONS, Bud!
The following story appeared on the Quinnipiac web site:
Quinnipiac University sophomore goaltender Bud Fisher (Peterborough, Ont.) was named ECAC Hockey League Co-Goalie of the Week on Monday afternoon. Fisher stopped 42 of 44 shots over the weekend to lift his club to the ECACHL tournament semifinals for the first time in program history with a sweep of Cornell. 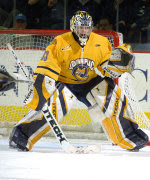 Fisher opened the weekend by notching his third shutout of the year and fifth career blanking in a 1-0 overtime triumph. In all, he turned away 23 shots in that contest.
The next night, he bounced back from a tough first period to stop 19 of 21 shots in a 3-2 win over the Big Red. Most importantly, Fisher stopped all seven Cornell shots in the third period, including a late flurry with the Bobcats protecting a one-goal lead.
The Bobcats now move on to the ECAC Hockey League tournament semifinals, where they will face St. Lawrence on Friday night at the Times Union Center in Albany. The two teams will face off at 4:30 p.m. The winner of that game will advance to Saturday's championship game at 8 p.m. The loser will play in the consolation contest at 4:30 p.m.
Scribbled & posted by David Warren Fisher at Wednesday, March 14, 2007