Rebecca posted this incredible photo of an inukshuk on her Rebecca Writes blog. Her son took the shot while hunting up in the Yukon. An inukshuk is a landmark. 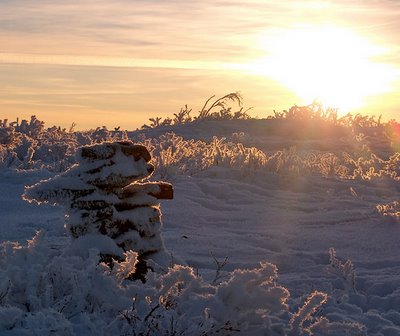 Here's a definition from the Canadian Encyclopedia:

"Inukshuk (singular), meaning "likeness of a person" in Inuktitut (the Inuit language) is a stone figure made by the Inuit. The plural is inuksuit. The Inuit make inuksuit in different forms and for different purposes: to show directions to travellers, to warn of impending danger, to mark a place of respect, or to act as helpers in the hunting of caribou. Similar stone figures were made all over the world in ancient times, but the Arctic is one of the few places where they still stand. An inukshuk can be small or large, a single rock, several rocks balanced on each other, round boulders or flat. Inuit tradition forbids the destruction of inuksuit. "

What landmarks do you have in your life to indicate times when God met you in a significant way? What about me? Landmark occasions have been the morning I met Jesus Christ, birthdays, anniversaries, etc. Times when God proved His faithfulness. I trust that each of us have plenty of "inuksuit" along the pilgrim pathway to declare God's faithfulness. He has certainly led us each step of the way.
Scribbled & posted by David Warren Fisher at Thursday, November 16, 2006