You Earned It, Gabe! 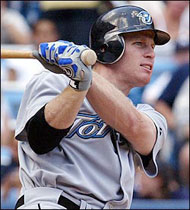 Toronto Blue Jays' outfielder, Gabe Gross, has rightfully earned a spot on the team's 25 man roster! Gabe led the team in home runs and rbi's during Spring Training and has shown why he was the Jays' #1 pick in the 2001 draft. Gabe has been a good friend since signing with the Jays' organization and has been a Baseball Chapel rep with the various teams he has played for. A strong Christian, Gabe has led several chapel services himself including a service this spring when Sports Illustrated writer, Tom Verducci, joined in. CONGRATULATIONS, my friend! You deserve this!

Note: Gabe was optioned to the AAA Syracuse Skychiefs on Sunday, April 10th, but his attitude is positive and he knows that God has everything under control! Gabe will be back in the "show" soon. - David, April 13th, 2005
Scribbled & posted by David Warren Fisher at Saturday, April 02, 2005