Separated by a Streetcar and a Bus

Yesterday I had the pleasure (it's great when "work" is "fun") of being with two of the teams I minister to within an hour or two of each other. It was OPENING DAY for the Toronto Blue Jays so I went to the Rogers Centre (formerly Skydome) to visit with some of the Jays and Red Sox before the game. Being OPENING DAY, there was a flurry of pre-game activity and it was good to see the facelift that parts of the stadium have received since the new owners took over. Rather than parking at the stadium and paying "an arm and a leg", I parked at the arena where the St. Michael's Majors OHL team plays.

Last night they were hosting another of my teams, the Peterborough Petes, and I wanted to catch the game. I took a bus and a streetcar from the rink to the stadium and then returned in time to watch the Petes lose a heartbreaker to St. Mikes 8 - 6. 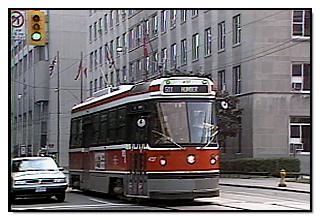 What a day! I've had the privilege of being the "spiritual caretaker" for the Toronto Blue Jays since they came into existence 29 years ago. I've done the same with the Peterborough Petes for the past 9 seasons. To be with both teams the same afternoon/evening was a blessing!

Thanks for your prayers as I continue to "point these athletes to Jesus"!
Scribbled & posted by David Warren Fisher at Saturday, April 09, 2005