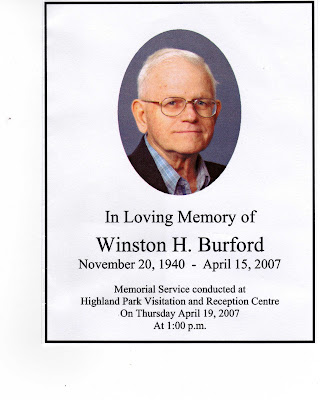 Tomorrow (Thursday) I'll have the honour and privilege of conducting the funeral for my dear friend Winston Burford.
Winston and I knew each other over 20 years ago when we attended the same church here in Peterborough. In recent years we had not seen each other until we made contact at a hockey game late last summer...a providential meeting as it turned out.
That evening we "connected" when Winston told me that he was going in for an MRI the next day to determine how much longer he might expect to live. Cancer had returned!
Winston had received a liver transplant about 5 years earlier. He was in a coma back then and expected to die when word was received at the last minute that a donor had been found. The Lord gave Winston another five, good years of life.
For the last three and a half months my friend has been in the Palliative Care Unit at the Peterborough Regional Health Centre. During this time I think Winston taught me more about living than I taught him about dying. He is now in the presence of the Lord whom he loved. We had communion together several times before he died and those were precious times! Please pray for his wife Norma and their daughters Christine and Beth and their families. THANK YOU!
"Precious in the sight of the Lord is the death of His saints." - Psalm 116:15 (KJV)
Scribbled & posted by David Warren Fisher at Wednesday, April 18, 2007