Parable in the Key of "F" 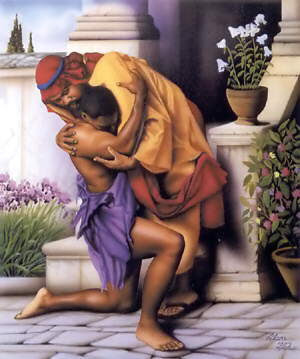 Do you recognize this parable?

Feeling footloose and frisky, a featherbrained fellow forced his fond father to fork over the farthings.

Fleeced by his fellows in folly, and facing famine, he found himself in a filthy farmyard. Fairly famishing, he fain would have filled his frame with foraged food from fodder fragments.

The farsighted father, forestalling further flinching, frantically flagged the flunkies to fetch a fatling from the flock and forthwith fix a feast.

The fugitive's faultfinding brother frowned on fickle forgiveness of former folderol, but the faithful father figured: " Filial fidelity is fine but the fugitive is found. What forbids fervent festivity? Let the flags be unfurled, let fanfares flare forth."

So, the father's forgiveness formed the foundation for the former fugitive's future fortunes.