Hail to the Heroes 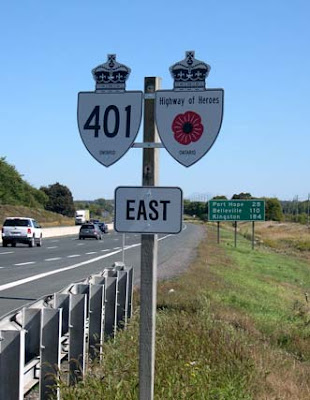 The damp, coldness of a gray, December day seeped into my shoes and inched up my long legs. The chill in the air somehow got inside my clothes sending shivers up my spine. It would be worth the discomfort though.

Our family eagerly anticipated the approaching cavalcade. Fire trucks, ambulances, police cars and other service vehicles lined the off-ramp of the four-lane Highway of Heroes at the Port Hope exit. Hundreds of grieving supporters stood at attention, ready to pay their respects to the families of three fallen soldiers. Men who paid the ultimate sacrifice. Sons, husbands, fathers, brothers, fiancés, friends who left Canada to serve and returned having given their lives for freedom.

This parade of vehicles from CFB Trenton carried the bodies of our heroes, slain in Afghanistan, their families and friends. As their flashing lights came into view I could trace the trickle of tears as they began to course down my face. I had warned my family that it would be an emotional experience for me. It always is at times like this.

One of the heroes hailed from Peterborough. Private Michael Freeman celebrated Christmas in a far-off land, gave his life a day later, killed by a roadside bomb and was repatriated today here in his homeland. The funeral will follow in several days time in a local church.

Those who came to pay their respects waved Canadian flags or waved their hands as the cavalcade passed under the overpass where we had positioned ourselves. I was proud to be a Canadian today. Proud to share the same hometown as our hero. Grateful for those who represent us in war-torn lands.

The police and military vehicles, hearses; limousines and other support vehicles passed quietly on their journey to Toronto. Crowds would cheer and show their support from every overpass on the Highway of Heroes from CFB Trenton to Toronto.

War isn’t pretty. Peace is elusive. Lives are lost. Sacrifices are made. Families are grieving. I was deeply moved.

“God of all comfort, strengthen those who mourn today. Come alongside and minister peace and hope in the midst of chaos. We pray through Jesus our Lord, the Prince of Peace. AMEN.”