Another powerful poetic piece from my friend, Greg Asimakoupoulos: 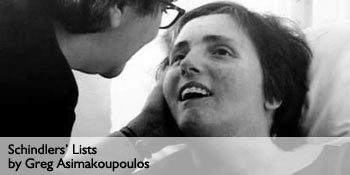 A mom and dad convinced their cause
should be protected by the laws
could not convince authorities
that what they thought was right.
They made a list of who to see
of those in Washington D.C.
who stand for life and liberty
because of freedom's plight.

And though the Congress took their side,
a judge down south would not be pried
by what he viewed as politics
and said he wouldn't rule.
The nation's mood turned on a dime
as those convinced this was a crime
began to protest loud and long
against what seemed quite cruel.

So, the Schindlers made another list.
This time of courts that had been missed
the first time that they made their case
to spare their daughter's life.
But every court and every judge
refused to act. They wouldn't budge.
To those whose broken hearts still hoped
each ruling was a knife.

Unlike the list in Spielberg's film
that saved the hunted from the kiln
the list that turned the Schindlers down
was hardly way too short.
It was a list of death, not life.
For Terri's dad and his dear wife,
a choice (that's really God's alone)
was hijacked by the courts.

But lest I err, I must include
the list the Schindler family viewed
as crucial to their holy cause
to let their daughter live.
The nameless faces with their signs
(incensed that justice remained blind)
maintained a vigil night and day
and begged God to forgive.

The Schindlers' lists? Oh, there were lots.
Some gave them hope. Some hurt like shots.
It's just like life to have both kinds
when courage starts to thin.
But just like Bob, we'd best not quit.
When options fade and critics spit,
just make another list because
the list-less never win.