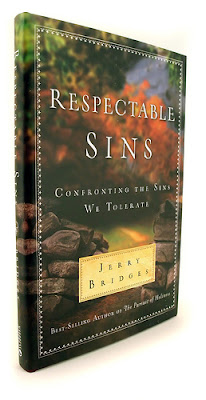 The following review of an excellent book which I'm presently reading is taken in its entirety from the following web site entitled The Shepherd's Scrapbook: http://www.spurgeon.wordpress.com

The title of Jerry Bridge’s new book – Respectable Sins — pops with sarcasm. While confronting many obvious and blatant sins in culture – abortion, corporate corruption, homosexuality, bullying and physical abuse – the Church frequently misses the sins running rampant within its walls.

“The motivation for this book stems from a growing conviction that those of us whom I call conservative evangelicals may have become so preoccupied with some of the major sins of society around us that we have lost sight of the need to deal with our own more ‘refined’ or subtle sins” (p. 9).

Later in Respectable Sins: Confronting the Sins We Tolerate (NavPress: 2007). Bridges makes this shocking statement: “In our human values of civil laws, we draw a huge distinction between an otherwise ‘law-abiding citizen’ who gets an occasional traffic ticket and a person who lives a ‘lawless’ life in contempt and utter disregard for all laws. But the Bible does not seem to make that distinction. Rather, it simply says sin – that is, all sin without distinction – is lawlessness” (p. 20).

Bridges begins the book with an excellent chapter on defining sainthood in light of the messed-up Corinthians being considered “saints” (see 2 Cor. 1:1). We are called to live as the “saints” we have been declared in Christ. The second chapter — “The Disappearance of Sin” — paints a strong argument that the Church is having a hard time defining and seeing her own sins. The third chapter – “The Malignancy of Sin” – sets out to reveal that sin is not merely what we do but who we are. Our sinful actions spring from our sinful heart. Sin is a “principle or moral force in our heart, our inner being” (p. 24). Bridges then gets into the Gospel as our hope. We can face and overcome sin because of the Cross and the powerful working of the Holy Spirit. Bridges has dressed the reader for warfare.

So what sins are “respectable sins”? Bridges’ chapters include the following topics:

- general ungodliness defined as a sinful attitude towards God
- anxieties and frustrations
- discontentment
- unthankfulness
- pridefulness revealed specifically in self-righteousness, even in a pursuit of theological accuracy, in prideful motives behind our achievements and revealed in a spirit of independence
- selfishness with our interests, time, money and inconsiderableness
- lack of self-control in eating, drinking and temperament, finances, entertainment and shopping - impatience and irritability
- anger, even anger towards God, and the underlying roots of anger in resentment, bitterness, enmity, hostility and holding grudges
- judgmentalism and a critical spirit over differing convictions and doctrinal disagreements
- envy, jealousy, competitiveness and being controlling
- the sins of the tongue like gossip, slander, lying, harsh words, sarcasm, insults and ridicule
- worldliness shown financially, by our idolatry and in “vicarious immorality,” that is, the enjoyment of watching or reading the sinfulness of others.

And Bridges says his list was whittled down for print!

Bridges’ new work fills an important gap. There are excellent theoretical and architectural works to help church leaders conceive the mission of pastoral ministry and fellowship groups (Instruments in the Redeemer’s Hands by Paul David Tripp is one great one). But Respectable Sins: Confronting the Sins We Tolerate (NavPress: 2007) may be the best yet in giving churches an easy-to-read book that has great potential in small group settings as believers help one another identify — and then mortify — the “respectable” sins of the heart. And only one who has proven himself faithful to the message of the Cross, like Bridges, is suited to lead us deep into the caves and caverns where sin lives in our hearts. A useful and excellent book worthy of consideration in the 2007 TSS Book of the Year contest.