Here's a funny story/joke told by Chuck Obremski at the beginning of one of his recent messages on Death and Mortality. Thanks Susan, for so graciously providing these excellent CD's of Pastor Chuck's messages! I've been enriched and encouraged as I've listened to them!

Linda called to say that Pastor Chuck is at the hospital getting two units of blood, which is intended to get him through the weekend--especially Sunday's sermon and Baseball Chapel afterwards! Both were encouraged by his blood test results, as his white blood cell count has risen to 9900, and his platelets tested at 146--the low end of normal but they've more than doubled, so his body is producing its own! Pastor Chuck is scheduled for four days of chemotherapy next week (Monday through Thursday), as Dr. Huang slightly cut down on the amount in hopes that Chuck won't end up in the hospital again. So, we pray for an uplfting weekend in terms of strength and fortitude and a powerful Spirit-filled message on Sunday.

TBN filmed Pastor Chuck today at Dr. Huang's office and the Cancer Center, and they'll be at church on Sunday for more filming. They plan to interview Chuck at home when he's feeling well enough. Pray for God's perfect timing for the biggest impact on lives and hearts. Thank you for your prayers! 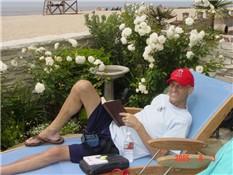 We love you, Chuck! Thanks for being such an example of "faith in action" for all of us! Be strong, my brother! - David