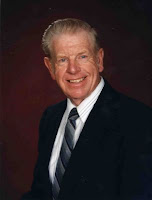 My mother recently wrote the following account concerning my father's love for boats. She wrote it out longhand, my son Tim typed it and I've added it here on Pilgrim Scribblings for your enjoyment.

Ches was born in Birmingham England in 1922 but came to Peterborough when he was 15 months old. He was raised beside the Trent Canal and from an early age he had a real love for boats. He built his first little boat when he was ten years old and actually took it over the lift locks. As a teenager he was an avid canoeist and took many canoe trips. He paddled past the site of Elim Lodge before the Arnolds founded it.

His parents were godly Christians, but it wasn’t until 1945 when he was a young married man that he accepted the Lord as his personal Saviour and Lord. From then on, the Lord has first place in his life, though he was always a devoted husband, father and grandfather.

Boating came to a standstill for a while as we had to sell the canoe to buy a refrigerator. A few years later he started to build a sixteen-foot “runabout” in our basement. He was frequently asked “How are you going to get it out of the basement?” But he had taken careful measurements and when the time came, out it came. When it was launched, it was the fastest boat of its kind around.

However, Ches decided later that a houseboat in which the whole family could holiday would be more practical. So, “Eagle Wings” was begun in the backyard. Ches jokingly used to say that he felt like Noah as he could only work on the boat in his spare time, of which he had very little, and the houseboat was a long time in the building. However, in 1967 it was launched in Little Lake, Peterborough, and began its life of service.

The family, especially the younger members, loved it and we took trips down the canal to Trenton and up the canal to Georgian Bay, and shorter trips around the Kawartha Lakes. It was often filled with young peoples’ groups and other friends. Its mooring place was Fife’s Bay on Chemong Lake.

We had known Bernard Aldridge for several years and one day when Ches and Bernard were talking, an idea was formed for using the boat once a week to take the guests at Elim for boat trips. The short trips would go out during Wednesday, and “Cruise for Missions” began. A box was placed in the boat into which the passengers could put donations for the mission of the week. This became so popular that we began taking the boat to Elim three days, and eventually built a dock at Elim so we could leave the boat there.

Later, we bought another so we could use two boats to accommodate the guests who enjoy the boat trips. We started going to Bobcaygeon on Tuesdays and Thursdays and to Curve Lake on Wednesdays. We now sold tickets for the boat cruises. Money from the tickets went to the mission of the week on Wednesday and to Elim Lodge on Tuesdays and Thursdays to help with the upkeep. Of course we had to have a second captain and much of the time this was our youngest son, Mark who was very adept at driving either boat. Other captains included our grandson Tim, Ellwood Webb, Gerald Charlton and Bernard Aldridge. Ches often let young passengers steer the boat for a while while wearing a captain’s cap. He was right there of course! Because everyone enjoyed his commentary so much, he always drove one boat to the destination and the other one on the return trip to Elim.

Because I had heard his commentaries so many times, I didn’t always pay attention but there was on part, which I wouldn’t miss for anything. When we passed between Kishgo and Morrsey Islands, Ches told the true story of snowmobilers who got lost in a snowstorm. They thought they were on the right track but tragically they were not, but were on the thin ice of the channel and perished. Ches always quoted the verses, “There is a way that seemeth right unto a man, but the end thereof are the ways of death” Proverbs 16:25, and, “Jesus said, ‘I am the way, the truth and the life, no man cometh unto the Father but by me.” John 14:6

Before we started each cruise he named the two boats and quoted the verses which inspired their names – Isaiah 40:31 (Eagle Wings) and 2 Corinthians 6:2 (El Tiempo).

When Ches got a letter from the coast guard saying that his boats didn’t meet the standards for passenger boats, even though he never received a cent himself from their operation, he bought a larger boat which he operated for a few years. This was Admiral Sir John, named for a relative of Ches who was an Admiral in the British Navy.

Not everyone knows of the hours of work needed to keep up boats, but Ches didn’t complain, He was doing this for the Lord. He needed help driving the Admiral including men who had their Master of Minor Waters. Derek Stevenson and Lee Werner had this title and enjoyed helping Ches, and Ches loved introducing them to Elim Lodge. Others who drove the boat were Mark, Jim and Tim Fisher, Jack Nelson, John Tough, Bernard Aldridge and Ross Liddell. Of course Ches never missed a trip and I tagged along as First Mate.

Operating the boat cruisers was not Ches’s only involvement with Elim Lodge. When Bernard and Ruth Aldridge felt they could no longer operate Elim, Ches was one of the group who took over its operation. From that day until his death, he was an active member of the board. He fabricated the steel parts of all the docks. He repaired things when required and built the children’s fishing dock. He jokingly said he was going to put up a sign, “No adults allowed unless accompanied by a child”. His designing skills were put to use in various places including the new chapel. He built and installed the steeple, hung the drapes at the front of the chapel and built and installed the railings on the platform.

His wise counsel was sought by several and he was generous with words of encouragement. He particularly enjoyed greeting guests at the dining room. He had a keen sense of humour and loved a good clean joke.