My friend, former Peterborough Pete Kurtis Foster, suffered a season-ending leg injury last night while playing for the Minnesota Wild. Please pray for a speedy recover for Kurtis who makes his home in Peterborough in the off-season. The following account appeared in a Minneapolis newspaper today:

(Minnesota) Wild defenseman Kurtis Foster had season-ending surgery at a San Jose hospital this morning after breaking his left leg during the second period of the Wild's 4-3 shootout loss to the Sharks. 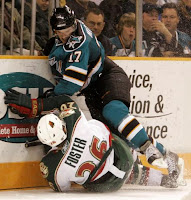 Foster suffered a displaced fracture in his left femur and was going to have a steel rod inserted to stabilize the leg, director of hockey operations Chris Snow said Wednesday night. A Wild spokesman confirmed the surgery took place this morning.

It's a devastating injury for the 26-year-old, third-year Wild blue-liner who had just started picking up big minutes and playing solid hockey.

"I thought he was playing great," coach Jacques Lemaire said. "He was playing his best hockey. It's a big loss."