I Know Where I'm Going! 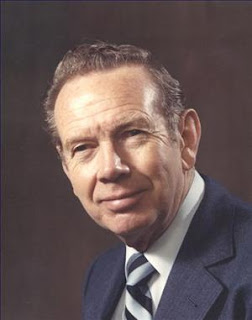 The following article appeared in our local newspaper the day after my Uncle Bill's funeral. I had the honour of reading the scriptures and being a pallbearer.

Our lives will never be the same as a result of Uncle Bill's entrepreneurial spirit. He launched a business that has been a world leader in precision zinc die casting. He and his siblings have left a legacy for our generation to carry on.

Thank you for a life well lived, Uncle Bill!

A man who loved his family, his work and solving complex problems, William (Bill) Frederick Fisher was above everything else a man of God and a student of God's word, his friends and family heard yesterday at his funeral.

Mr. Fisher, 90, an innovator and generous businessman, died a week ago today.

Mr. Fisher's nephew Jim Fisher described to mourners his uncle's business legacy while his youngest daughter Jane Ulrich shed light on the man he was at home.

It's difficult to summarize all of Mr. Fisher's accomplishments, Jim said.

"(But) everyone, whether they know it or not, has been impacted every day by something Bill Fisher and FisherCast has had a hand in," he said.

Mr. Fisher had "no long list of degrees" before he apprenticed at General Electric. But he had parents who encouraged his dreams and to "trust in the Lord and don't be afraid to take some chances," Jim said.

He was 25 and went on to develop new and better ways of assembling components using molten die casting technology and also invented injected metal assembly in 1942 now used worldwide for the joining of complex components and the termination of cable.

The business eventually turned into an international company with plants in Canada and the United Kingdom, and previously a plant in Watertown, N.Y. that closed in 2003.

Although Mr. Fisher was always president and CEO, until 10 years ago, he was happiest being chief engineer, Jim said.

For Jane Ulrich, her father was an "incredible person" who loved that he could walk out his back door 30 metres and into his shop.

Mr. Fisher would get up in the middle of the night to work on a new idea that was running through his head, she said.

In his sermon, Rev. Ray Hendriks said Mr. Fisher deserved every one of the accolades he has received but his relationship with God drove everything that he did.

Hendriks visited Mr. Fisher on Palm Sunday, before his death, and was greeted with an enthusiastic "good morning."

It was quiet for a few moments, but then Mr. Fisher spoke.

"I was in Jerusalem, I walked through those gates ... I went to where Christ is crucified and I know where I am going'," Hendriks recalled Mr. Fisher saying.

"And then he pointed his finger upward."

Mr. Fisher is survived by his wife Shirley, children Paul, Doug, Susanne and Jane and a sister Eileen.

He was buried at Little Lake Cemetery.