Four Men Who Changed My Life

Sitting in a restaurant in early January 1992, I felt impressed to put together a tribute to the man who had impacted my life in a powerful way over the years. Dad had undergone surgery the previous fall and was not doing well. Letters were sent to about seventy-five of dad’s family, friends, employees, civic leaders, missionaries and others. The responses came back quickly and we presented dad with a tribute book in Kingston General Hospital on his 70th birthday. Looking back, it’s been the most rewarding thing I’ve done. Without the inspiration of a godly, loving father this would never have happened. Dad left a legacy of faith that I cherish more and more.

My life has been molded and shaped by a variety of people, places and things but the greatest inspiration came from dad. As I reminisce I can trace his influence in almost every important area of my life. Since dad’s passing others have impacted me in very significant ways. When I consider these people, a common thread weaves its way through the circumstances that brought us close . . . the dreaded disease, cancer.

Dad’s life came to a premature end after a battle with lung cancer. For almost his entire seventy years dad had been the picture of good health. The news of a shadow on his lung came as a huge shock. When he finally slipped into the presence of the God he loved and served, we lost a Christian gentleman, missionary statesman, respected businessman and a loving husband, father and grandfather. What an inspiration dad was to many!

Dad quietly taught me Christian values by example more than by preaching. My interest in world missions was nurtured by dad’s commitment to take the “good news” of God’s love to the whole world. If there was ever a generous man it was Chester W. Fisher! He held onto “things” loosely. He was never pretentious. Those who knew him loved him. I’m so grateful for a Christian father!

A family friend began to spend quality time with me after dad’s homecall. Mr. Keith Price, a faithful preacher of the gospel, offered encouragement, support and nurturing as I sought to serve the Lord through sports. Mr. Price lived in Victoria, BC and when his preaching schedule brought him to the Peterborough area he would always block out time for me. We would sit by the lake at Elim Lodge and he’d mentor me in the important things of life. His friendship and counsel were priceless. Several years ago when I was so discouraged that I considered quitting the ministry, a personal note arrived from Keith Price. God’s timing was perfect. I continued on with a renewed zeal.

In early January 2001 I flew to Victoria to be at Mr. Price’s side in his hospital room. He, too, was battling cancer and had indicated that he’d like me to visit with him one last time. When I arrived at the hospital, a small sign was taped to his door which read, “Do Not Disturb 1:30 – 3:30 p.m.” This dear man who had always taken time for me was giving me another gift, two precious, uninterrupted hours. He had taught me how to live. Now he was teaching me how to die. He drew me close to his side, held my hand for two hours and poured out his heart. He passed away a month after my visit but he left a lasting legacy just like my father had done.

When I owned the local Christian book store I met some wonderful people. One of those acquaintances has become a dear friend in recent years. Syd Birrell chronicled his son James’ battle with neuroblastoma through his regular e-mail updates. Those who received them were enriched in an incredible way. Syd’s transparency and vulnerability were so refreshing! I’d tearfully read his updates and pass them along to hundreds on my list. There was a strong bonding between Syd and me as we watched James finally succumb to this dreaded disease. My life was immeasurably blessed. 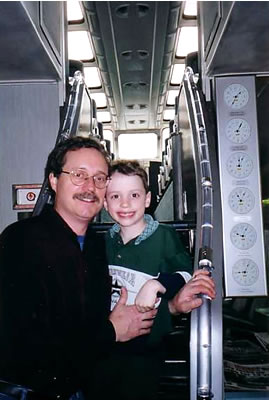 
Since James went to “his house in heaven” in December 2001, Syd and I have met several times to encourage one another. Recently we had another talk and visited James’grave site. Words can’t describe how it felt to quietly stand with a man who had lost a child. Syd Birrell has been an inspiration to many. I thank God that I’ve been allowed, somehow, to get an insider’s look at how His grace can strengthen a grieving couple.

I met Roger Neilson in the mid seventies and have admired and respected him ever since. Roger has encouraged and blessed my life in ways that can’t be measured. One of my prized collections is the file of personalized Christmas cards from Roger that go back twenty-five years. Roger has a unique way of integrating his vast hockey knowledge and expertise with his strong Christian faith.

My relationship with Roger Neilson became a deeper friendship after he began his fight with cancer. It’s strange how relationships with my father, Keith Price, Syd Birrell and Roger Neilson were all deepened when we began walking together through the “valley of the shadow of death”. There’s something about the brevity and uncertainty of life that brings Christians together in a more intimate way when death becomes imminent.

Since Roger’s return from Ottawa I’ve visited him in his home. Before I left, we bowed our heads and prayed together. Driving home I thanked God for allowing me to be part of this man’s life. What an inspiration Roger has been! What a blessing!

Looking back I thank God for true friends, people who have loved me, supported me, and have given me the wonderful gift of their time. Each of these individuals has inspired me in unique ways. I pray that my life will somehow do the same for others.