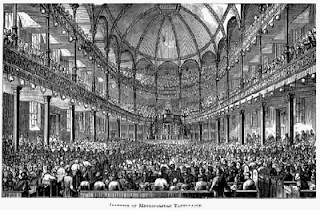 I had read the following account of the conversion experience of the Prince of Preachers, Charles Haddon Spurgeon, in the past but Alex Kloosterman related it this morning in his excellent message at our home church.  Spurgeon would have been proud of Alex's preaching.

Here is the story:

Charles Haddon Spurgeon was born on June 19, 1834, just ten days after the great William Carey died in India. Because of economic conditions the young Spurgeon was sent to live with his grandparents at the age of 18 months. His grandfather, James Spurgeon, ministered to the church at Stambourne for 54 years. Those few years with his grandparents made a profound impact on the young man’s life.


Spurgeon was always a bit of an enigma intellectually. He could appear to be unlearned when in reality he had a great intellect. An incident from his early school days is a good example of this. When he was around the age of ten, young Charles’ grades unexplainably began to drop. It seemed the more winter deepened, so did his scores. The teacher at first was baffled by this plummet in performance until he realized that the upper grader students' seats were near a drafty door where cold wind seeped in continually. When the teacher reversed the seating order so the higher grade seats were away from the cold draft, Spurgeon’s grades rose accordingly.
Like many young people of his day, Charles struggled over his relationship with God for a number of years. It was common in those days for children to be encouraged to seek after God with their whole heart. There was no such quickness to get people "to make a decision" as we see in many of our churches today. Just as John Bunyan struggled against God, Spurgeon remembered how he fought against the idea of giving into Christ’s Lordship:

"I must confess that I never would have been saved if I could have helped it. As long as ever I could, I rebelled, and revolted, and struggled against God. When He would have me to pray, I would not pray … And when I heard, and the tear rolled down my cheek, I wiped it away and defied Him to melt my soul. But long before I began with Christ, He began with me."

After some time of alternately searching and running, the God who had already begun with a 16 year old boy led Charles to an encounter which he never forgot. For some time the Holy Spirit had been dealing with the young man’s soul. Spurgeon said that "God was plowing his soul, ten black horses in his team — the ten commandments — and cross plowing it with the message of the Gospel, for when he heard it, no comfort came to his soul."  With all of his Biblical upbringing and praying, Charles was still lost in the darkness of his own heart.
The incident that follows has been repeated so often in so many sources that it needs no documenting. One Sunday morning the snow was falling so hard that Charles could not get to his own church so he wandered into a Primitive Methodist Chapel. Doctrinally this little fellowship was world’s apart from the Congregationalist heritage of the Spurgeons. Yet into this little congregation of less than 15 people Spurgeon wandered that cold winter morning. As he entered an unlearned and unnamed itinerant preacher proclaimed the text, "Look unto Me, and be ye saved, all the ends of the earth." During that message, the preacher looked directly at the young stranger in their midst and said, "Young man, you look very miserable … You always will be miserable in life and in death if you don’t obey my text, but if you obey now, this moment you will be saved." Spurgeon later wrote, "Between half past ten, when I entered that chapel, and half past twelve, when I returned home, what a change had taken place in me!"  Charles Haddon Spurgeon had indeed become a child of the Kingdom.

Note:  Spurgeon went on to pastor the flock at the Metropolitan Tabernacle in London (pictured).