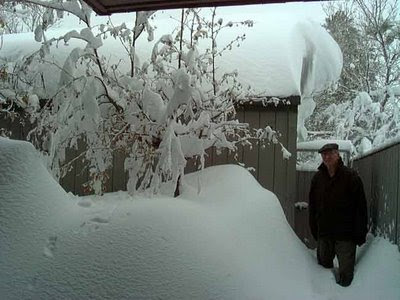 This article appeared in the latest edition of The Millbrook Times:

What a winter it’s been! Record snowfalls have kept us shovelling out from under the drifts. Just when you think the driveways and sidewalks are finally clear we get dumped on again. If you enjoy the white stuff you’re on cloud 9. If not, you wish the snow would stay up there in the clouds. Snow blower manufacturers are thrilled. Retailers have sold out of shovels several times already this winter. I’m praying for an early spring but I’m realistic enough to know it’s just a pipe dream.

Snowed under! It’s become a common phrase in these northern climes. Over the Christmas season we were snowed under with “to do” lists and festive events to fit into our hectic schedules. As we approach RSP deadlines and tax time (don’t remind me) accountants are snowed under with work.

Unfortunate, difficult, unplanned circumstances can paralyze us and render us helpless…but not hopeless.

In the midst of our blizzards there’s a God who rides with us through the storm. Nothing escapes His watchful eye. He will not leave us alone in the midst of life’s downpours. He has promised to never leave us or forsake us. He never will. His promises are certain. He cannot lie.

Feeling snowed under? Call upon the One who creates life and everything in it and walks with us through every trial. He will lift the clouds and send a rainbow…in His time.

“God's voice thunders in marvellous ways; he does great things beyond our understanding. He says to the snow, 'Fall on the earth,' and to the rain shower, 'Be a mighty downpour.'” – Job 37:5,6 (NIV)