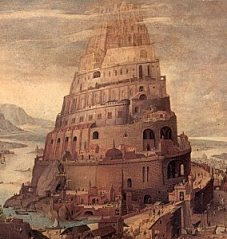 The following article was written by Trevin Wax and appeared on his Kingdom People blog. Something to think about...

My children will not grow up in a country where race is considered a barrier to the presidency.

That fact by itself made me glad as I watched Barack Obama sworn in as the 44th president of the United States yesterday. It gave me a great sense of satisfaction to think about how far our country has come from the days of separate water fountains and lynch mobs.

But the thrill of seeing an era of sinful racism put behind us has faded quickly, for me at least. I hate to be the one to pop the balloon of our collective national pride in this historic moment, but I sense that we as Americans are facing the rise of a new national sin – one that is more subtle and even deadlier than the sins of our past - one that is common to all other empires that have risen and fallen throughout the ages:

A smug sense of self-righteous superiority that usurps the rightful throne of God.

Watching the news over the past few days has been almost sickening. No, it’s not the average citizens fawning over Obama as if he were the Messiah. Or the over-hyped statements from reporters trying in some way to capture the “historic nature” of the events and speeches taking place. Annoying as the now blatantly subjective news coverage has been, that is not what has bothered me the most.

Instead, the truly troubling aspect of the new era we have just inaugurated is the underlying assumption among so many in our country that now, finally, we have truly arrived. A new age has dawned!

We are now above racism in our land. We have put behind us the terrible sins of our past and we are moving forward into a new world of hope and peace. We have recaptured the moral high ground in our world. We are unstoppable, unbeatable, unassailable!

We deceive ourselves. Our rhetoric reveals an imperalistic mindset grounded in smug self-righteousness and a false sense of superiority.

We are so enlightened that the writers of our newsweeklies can thumb their noses at six thousand years of human history (and almost every other civilization in the world today) and decide that same-sex marriage should be legalized.

We are so enlightened that we can eliminate whatever might stand in the way of our sexual exploits or prosperity-seeking, even if that means the sacrifice of another 50 million unborn children.

We are so enlightened that we can restore Science back in its proper place (meaning that it’s okay to create human life in order to destroy it, as long as we, the powerful, can benefit somehow).

We are the enlightened ones who bring justice and freedom and peace to the world.

You could hear it in Bush’s audacious speech after 9/11, in which he claimed that “we will eliminate evil from the world.”

You could hear it in John McCain’s claim at one of the 2008 debates that the “United States of America is the greatest force for good in the world.”

You can hear it even now in the speeches of Barack Obama: We are the world-changers.

Behind the clamor of the adoring media and the sight of swooning fans in Washington, D.C. – we can see that what truly unites us as a nation is a sense of superiority over the rest of the world, a belief in America as our savior, a naïve assumption that our cause is always right.

The Tower of Babel is going up right before our eyes.

But how many leaders have to come and go before we realize the truth that only Jesus Christ is Lord?

How many examples of government injustice have to take place before we realize that Christ’s Church is still the greatest force for good in the world?

How many towers have to fall before we realize the truth that his kingdom is the one that will never fail?

We live in a day when hope has dawned, yes. But not because we have elected a new president. Let the Church never forget:

Peace has broken out because of the cross - God’s resolution to our war against him. Hope has dawned because the tomb of a certain first-century Jew has been emptied of its contents. Justice will reign because of the Church who anticipates his return and dominion.

Nations rise and fall, but the Word of the Lord stands firm forever.