Gabe's Going to the World Series 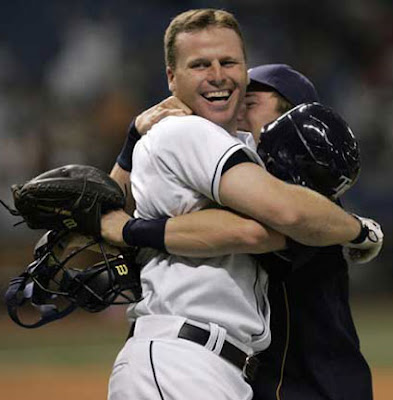 My good friend Gabe Gross and the Tampa Bay Rays are World Series bound after knocking off the Boston Red Sox last night. We wish Gabe all the best as he gets to fulfill a dream.

The following article appeared in the TAMPA TRIBUNE last week:

ST. PETERSBURG - When Coach Tony Dungy won the 2007 Super Bowl with the Indianapolis Colts, he took advantage of his moment in the national spotlight to give the glory to God.

Gabe Gross of the Tampa Bay Rays does that every time he steps up to the batter's box.

In choosing the Christian worship song "Blessed Be Your Name" as his walk-up theme at Tropicana Field, the Rays' outfielder publicly declares his faith before live crowds and TV audiences at every home game.

"It's about the Lord giving and the Lord taking away," Gross, 29, said of his chosen song during a phone interview from Boston. "In good times and bad, we need to honor him no matter what. That's what I believe and what I want to represent in my life."

His music selection – Christian songwriter Matt Redman's 2005 Dove Award winner for best worship song - is a departure from the fare selected by most of his teammates.

Gross, who was raised a Baptist, makes his off-season home in Auburn, Ala., where he attended college. He and his wife, Kelly, recently announced they're expecting their first child in May.

"It's been a blessed year all the way around," said Gross, who was traded to the Rays from the Milwaukee Brewers in April – just in time for the team's transforming season that took them from worst in 2007 to first in the American League East Division.

He admits "there are definite challenges" to being a professional athlete, particularly when players and salaries rise to star status. Some get drawn into an intoxicating lifestyle of drugs, material excess and late-night partying and end up in legal or personal trouble.

Putting his faith first keeps him focused on what he considers most important, Gross said. He attends Sunday chapel led by the team chaplain while on the road and has a few Christian friends on the team to talk with when he needs support.

It's not about winning or losing. It's about staying in the word of God," he said.

On the road or at home, he begins every day in solitude with his Bible, drawing inspiration from the Scriptures.

And fans may spot him in worship out in right field during a game, singing a worship song out loud to himself. He and evangelist Billy Graham share the same favorite hymn: "How Great Thou Art."

He had another motive in picking "Blessed Be Your Name" as his signature song. He wants to connect with other Christians in the stands.

Jenn Carideo got the message. She recognized it the first time she heard it at Tropicana Field.

"I thought, 'Wow, this isn't something you expect to hear at a baseball game, of all places.' It put a whole positive spin on the experience for me," said Carideo, who attends First Presbyterian Church in downtown Tampa.

She gives kudos to Gross for making a "bold statement" about his beliefs in an atmosphere where it may not get a friendly reception.

'"It's refreshing that someone is man enough to do that," she said.

She also likes the idea that her 4-year-old son, Mac, also an avid baseball fan, hears the same song in church and at the ballpark.

The Rays need one more victory against the Red Sox to win the AL Championship Series and earn a spot in the World Series. Game 5 is Thursday night in Boston. Games 6 and 7, if necessary, would be played in St. Petersburg this weekend.

Is Gross turning to prayer for a World Series slot?

"Oh, I'm just enjoying the experience right now. We're having a blast," he said with a laugh. "My prayer is that everything I do will honor God, no matter what happens, but it sure would be nice to take it all the way."

By MICHELLE BEARDEN | The Tampa Tribune