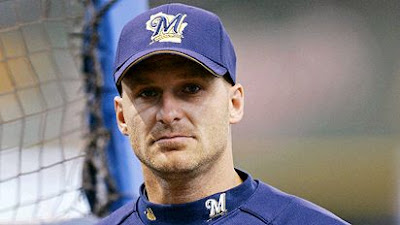 During my 33 plus years of baseball ministry I have crossed paths with thousands of ballplayers and have become friends with hundreds of them. Corey Koskie is one of those men who I connected with. The last year and a half has been difficult for Koskie, a Christian who loves the Lord.

Corey Koskie is coming to grips with the notion that his playing career might be history. The next chapter in his baseball life probably will consist of doling out sunscreen, hitting grounders to a bunch of elementary schoolers and revving up the minivan for a postgame trip to Dairy Queen.

In his transition from professional third baseman to Little League dad, Koskie has found that some emotional hurdles are more difficult to surmount than others. Each night, he leads his three young sons through their bedtime prayers. During one recent session, he asked the boys if they had any special requests.

"God, can you please heal my daddy's head?'' asked Bradley, the oldest at age 7. Prayer can be a powerful thing. But as Koskie has discovered, no amount of faith or introspection can rewrite the past or un-ring a bell.

It's been 18 months since Koskie took a seemingly innocuous tumble in pursuit of a Felipe Lopez pop fly in Milwaukee, and he hasn't played a game since. After an aborted comeback attempt in the Cactus League and a summer spent at home in Minnesota watching the Brewers from a distance, he became a free agent in October when Milwaukee management declined to exercise his $6.5 million option for 2008.

When Koskie isn't riding a stationary bike or taking a spin on the treadmill, he is sorting through the medical bills. Over the past year, Koskie has visited the Mayo Clinic and conferred with Drs. Michael Collins and Robert Cantu, two of the most renowned authorities on post-concussion syndrome.

Several months ago, he began working with Stephanie Smith, a professional trainer who specializes in PCS. Koskie has made considerable strides with Smith's help, and he recently felt a "flicker of hope'' after playing a spirited game of ice hockey with his boys and feeling few of the usual side effects.

Still, it's a long way from working up a sweat in the backyard to playing Major League Baseball again, and Koskie doesn't want to tease himself or a prospective suitor with unreasonable expectations. He has told his agents, Pat Rooney and Brian David, that he'll let them know when he's ready.

"If somebody out there wants to give me a shot, we'll cross that bridge when we come to it,'' Koskie said. "But I don't want to leave teams in limbo. I don't want to deal with that whole thing of, 'Hey, when are you gonna be ready?' This has to happen on its own timetable.''

While concussions are commonplace in football, hockey, boxing and other "collision'' sports, Koskie is part of a much smaller fraternity in baseball. It was like a bolt from the blue last year when catcher Mike Matheny, widely regarded as one of the game's toughest customers, announced his retirement because of concussion-related issues.

In St. Louis, Jim Edmonds endured bouts of dizziness and blurred vision after slamming his head against the warning track in pursuit of a fly ball in 2006. Edmonds worked through his problems and is ticketed to play center field for San Diego this season.

Koskie, in contrast, is stuck in a sort of netherworld between acceptance and denial. He's not so bereft of hope that he's ready to call it quits, but he's realistic enough to know what the future holds.

Koskie has been through the wringer since spring training of 2007. For a while, he was bothered by a persistent ache at the base of his neck. While that pain gradually subsided, he discovered everyday tasks could produce debilitating results. The simple acts of driving a car, watching television or checking e-mail on the computer left him dizzy and overcome by nausea. He also was plagued by chronic fatigue.

When the Brewers visited Minneapolis in June, Koskie made the short drive to the Metrodome to see his Milwaukee teammates. But the lights and the hubbub around the ballpark overloaded his system, and he had to go upstairs for some solitude and fresh air.

Along the way, Koskie has found solace in talking to fellow ballplayers in the same boat. He has discovered a helpful sounding board in Matheny, who now is feeling well enough that he is talking about going to spring training and helping out with the Cardinals and Giants.

Koskie also shared a "eureka'' moment with former Twins teammate and fellow Canada native Justin Morneau, who has suffered a concussion or two along the way.

"We were talking, and Justin asked me, 'Does it feel like everything is going by in slow motion -- like stuff has sped up and you're always a half-second behind everything?' I told him, 'Yeah, that's exactly how I feel!''' Koskie said.

Koskie is encouraged by his progress with Smith, a certified athletic trainer who worked at the 2002 Salt Lake City Olympics and helps run the Twins Cities Northern Lights, a Junior A hockey team in Bloomington, Minn. Smith takes a "holistic'' approach to recovery that allows Koskie to work out at his home, where he can be free of distractions and avoid getting behind the wheel of a car, which tends to trigger his symptoms.

She also is flexible. If Koskie is able to do 10 minutes on the exercise bike or treadmill on a given day and elevate his heart rate beyond 150 beats per minute, that's fine. If he feels sluggish and needs to shut down, that's fine, too.

One of the biggest challenges for Koskie is pulling in the reins when he has been conditioned to try to work through obstacles.

"Athletes, by their very nature, are competitive,'' Smith said. "There's a serious drive in them to do the best they can at their sport. If somebody tells you that your biggest job right now is to rest, that's counterintuitive. The natural inclination is to work harder and do everything you can to get back out there. But there can be serious setbacks if you return to the sport too quickly.''

The struggles of Matheny and Koskie have raised awareness of concussions in MLB, and that's produced some welcome changes. This year, for the first time, baseball instituted a baseline concussion testing program for all 30 clubs in conjunction with player physical exams. Many clubs already used Web-based software to test players, but now it's mandatory across the board.

Milwaukee general manager Doug Melvin said concussions pose a challenge for clubs in several ways: 1) The team trainer might be too overtaxed to give the player in question the requisite attention. 2) The player with a concussion might feel a sense of "guilt'' because he is incapacitated, even though he looks fine. 3) There is no specific road map to recovery.

"There's not much the trainer can do,'' Melvin said. "It's not like a labrum tear or a ligament in your elbow, where there's an actual outline for what to do. You'll throw from 40 feet and extend it to 90, or go from a soft-toss program to long-tossing. From a concussion standpoint, there's nothing the trainers and doctors feel is a perfect cure.''

The athlete's best allies are patience and time, and Koskie has an abundance of each. While he waits for his story to play out, he's kicking around the idea of writing a book about his experiences. What will the ending be? Who knows?

"I just want to get my life back,'' Koskie said.

After 18 months with too many headaches and not enough answers, it's about time.