Donation for a New Life

The following story appeared in our local paper, the Peterborough Examiner, yesterday.  Written by a good friend and editor at the Examiner, Ed Arnold, the article chronicles the health concerns of another friend of ours, Tim Dalliday (pictured).  Please pray for Tim and his family as they trust God to provide a donor and to give His strength and abiding peace as they wait patiently.
Ed Arnold writes: 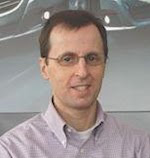 Tim Dalliday is looking for a new life.
A healthy life that doesn't include fever, chill, fatigue, internal bleeding, that sense of never knowing and the threat of a decaying life.
The 45-year-old father of two, Rachel, 14, and Jack, 11, is hesitant to go public with his problems, but it's another way he may get that new life . . . by finding a donor.
From the outside he looks fit and trim but an organ inside him is eating away at his life.
The athletic Tim, who was running half marathons only a year ago, has a rare liver disease called primary sclerosing cholangitis (PSC), without a definite cause that inflames your bile ducts. Bile is the stuff we need to digest fat and take the waste from our livers.
When the ducts narrow, of course, the bile stays in the liver, which causes damage and leads to various problems. Some people can be treated and live a good life but it can be a life-threatening disease for others.
In Tim's case doctors have told him he needs a portion of someone's liver within two years.
He has been searching for some time for the right match and had two donors rejected at the last minute when their own medical issues showed up.


Now, he waits again. His life is in limbo.
"I have one more donor who has sent in his medical information and waiting to hear back if TGH is going to proceed with the tests they put donors through."

But he's worried that this one may not work out. He also knows his sporting hero, former National Football League superstar Walter Payton, died of the disease while waiting for the same transplant. In the meantime he contacted pancreatic cancer and any hopes of a transplant faded. There is a good chance Tim could develop the same problems, so he is taking a proactive approach while he is still relatively fit hoping he can get a donor sooner rather than later or worse, never.
In 1993 Tim was diagnosed with Crohn's disease. About 5% of males who have this develop PSC and five years later he did. He was put on medication with the knowledge that most people would be in need of a transplant within 10 years. He lasted 13. He believes it was because he kept so fit doing half marathons, triathlons, and playing sports.
However, it has became progressively worse and there has been more damage to the liver.
Now he waits.
He works at Peterborough Volkswagen and says work is the best thing for him right now.
"I park my worries at the curb and that helps." The Eatson family (owners of the dealership) has been very supportive and completely understanding."


Tim might be off work six months if he goes through the transplant operation that would regenerate a liver after doctors removed his diseased one.

His frustration, concern and worries are obvious. He has a wife, Leslie, the two children and anyone that knows Tim knows he a family man first and foremost.

"I just want to find a donor and move ahead with the procedure and hopefully lead a healthy, active lifestyle for years to come."
The donor would give up a portion of his liver, which would regenerate.


Another local man Nicci Johnston, 30, did this five years ago to save the life of his wife's uncle. It's the only organ in the human body that does regenerate.
Nicci, an active athlete with two of his own children, donated about 70 per cent of his liver, which regenerated and he has had few problems since. The person who gets that portion grows a healthy, operational liver.
Tim, the son of well-known retired sports broadcaster Gary Dalliday, and brother of another popular local broadcaster, Pete, was placed on the organ donation list at Toronto General Hospital in February.
"My rare liver condition has hit the point where transplantation will give me more life than my current liver will."
"I'm feeling pretty good and have bounced back nicely from a recent blood infection in July."
Because his original transplant operation was scheduled for Aug. 4 he looks on the positive side. "I got to finish the season coaching Jack's baseball team."
"So where do things go from here you ask?" he tells his friends in a recent letter to them to update his condition and look for a willing donor.


"Well, I still need a donor to step up who has type A or O blood and is healthy and under age 65."
He took the plunge to write the note in case they could, or would, help.


He knows how difficult it is to ask for this kind of assistance and how difficult it might be to make the decision to assist, but what else can he do, sit and wait for a phone call?
"If they are willing to help they should go their family doctor to learn their blood type and fill out the health questionnaire on the T.O. General Multi-Organ Transplant website (about a six page form).
"You fill it out and then fax it back to them. They are pretty quick at getting back to you; they will book you the next week for various testing such as MRI, CT Scan, ultrasound and blood work. They do it all in one day! Fun stuff eh! The medical information is confidential and I don't even know who has stepped forward. They assign a cocoordinator to you and I have my own. (Tim wouldn't even know you've done it.)
"Until then I will wait patiently (Job should have been my middle name...) and put the situation into God's hand for I know He has a plan and a purpose for my life."
Tim says "The biggest thing I'm looking for is someone's generosity to make that ultimate sacrifice so I can live a regular life. I would be humbled by their generosity."
Scribbled & posted by David Warren Fisher at Tuesday, August 31, 2010