No Wonder They Call Me "Fish" 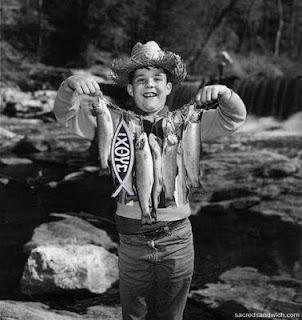 When I was a kid they called me "Red", "Stretch", "Bucky" and a few other not-so-nice nicknames.
It wasn't until I started working with the Peterborough Petes 15 years ago that I got the nickname "Fish".
A few professional baseball players would refer to me as "Fish" but it was mostly hockey players who called me that.
I certainly didn't get the nickname for my ability to catch fish.  The only catch of any consequence was a nice largemouth bass I snagged as a teenager.  Little did I know that it was caught out of season. What a sinner! I was so proud of the picture someone took of me holding that beauty.  It's good I didn't show it to the game warden.
Nowadays our vehicles have a "fish" symbol on the back, signifying that we are "Christians".  Hopefully my driving doesn't negate what I'm trying to convey.
Anyhow, enough of this "Fish" talk.  The kid in the picture is NOT me but I "loved" the photo, courtesy of the Sacred Sandwich web site.  Check out some of the pics.  Hopefully you'll get a few good laughs.  If not, all I can say is "Lighten up, my friends!"