Billy G's John the B 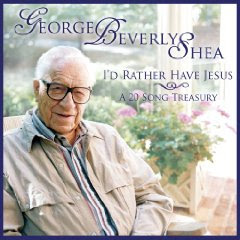 My friend Greg Asimakoupoulos has penned the following words to honour George Beverly Shea on the occasion of his 100th birthday.

Bev Shea has been a favourite singer of mine since I was a kid. The Wonder Of It All is that I'd Rather Have Jesus than silver or gold and my heart resonates when Bev sings How Great Thou Art. The Stranger of Galilee certainly is no stranger to this Canadian-born icon who has sung about the God who accepts me Just As I Am. HAPPY BIRTHDAY, Mr. Shea, and thank you for 100 years of faithful service with the King of kings and with Billy Graham. We have the Blessed Assurance of spending eternity together. Even so come, Lord Jesus!

Greg posted this piece on his web site. Check it out here.

Billy G's John the B

A masculine name, a feminine one,
a New York baseball stadium
recall a legend of our time
who sang from second base.

"I'd rather have Jesus than silver or gold,"
George Beverly Shea sang out loudly and bold.
For one hundred years this remarkable man
has called us to "rather Him" too.

He's earned a nod from Willard Scott.
From Billy Graham he's owned a slot.
"How Great Thou Art" would grease the skids
before his good friend spoke.

Like John the Baptist, Mr. Shea
prepared the masses to obey
the one who followed and who gave
the very words of God.

One hundred candles celebrate
a life for whom the bus will wait
to chauffer Bev (just as he is)
when times like these shall cease.

* George Beverly Shea was born February 1, 1909 in Winchester, Ontario, Canada. Originally an radio announcer at WMBI radio in Chicago, "Bev" Shea became a member of Billy Graham's Evangelistic Association some sixty years ago. At each crusade service (often held in sports stadiums), he sang immediately before Mr. Graham stood up to preach. The signature songs associated with the Graham Crusades and Mr. Shea are "How Great Thou Art," "In Times Like These," "Just As I Am," and the gospel song composed by"Bev" Shea... "I'd Rather Have Jesus."