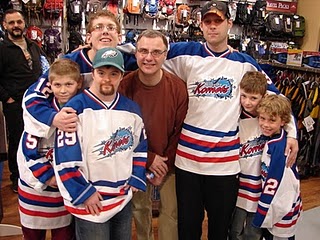 As a co-founder with my wife Carol of the Kawartha Komets, we appreciate the dedication of our coaching staff.  The following story was written by Dale Lowe...one of the totally committed coaches of the Komets. - David Fisher


Grab a tissue before you read Dale's moving account:
"Anyone who volunteers will tell you that you get back twice as much as what you put into it.  And, I've come to learn that even more so over the past 2 years, helping to coach the Kawartha Komets special needs hockey team.
This past week, our 2 local squads participated in the 64-team Special Hockey International tournament.  It was my first time to attend the annual year-end event.  And, as we boarded the bus early last Wednesday morning for Boston, I knew that I was in for an emotional 5 days of watching special athletes from across the world...playing the game they love so much.
But, nothing had prepared me for the tear that ran down my face on Saturday afternoon.
In special needs hockey, there can often be some disparity between teams because of their wide range of hockey skills and challenges.  As the undefeated Junior Komets entered their final game against the Steel City Icebergs (from Pittsburgh), it was clear that our team was faster and more skilled than their opponents.  And (realizing this) our juniors quickly adapted their game...showing a tremendous amount of empathy for the Icebergs.  Then, the most incredible spontaneous act of sportsmanship happened in front of the Steel City net.
Brandon Vansickle (# 58) of the Kawartha Komets gave the puck to 5 year-old Nicole Mullins of the Icebergs.  As you will see in the video, Nicole uses a special-made walker created by her father, fully equipped with her hockey stick.  Nicole was born with hip dysplasia...meaning she has two dislocated hips, two short-bent femurs, and two club feet.  But, special needs hockey has allowed her to be part of a team...and allowed this tiny, courageous and very determined girl to achieve her goals.
After Brandon put the puck on Nicole's stick, the entire Komet line skated the length of the ice beside her, and watched her score a goal...as fans from both sides cheered wildly. Afterwards, there were tears running down the cheeks of many of us who had witnessed this unprompted, unscripted act of sportsmanship.  I have never been so proud to be part of a sports program.
I should also mention that the Senior Komets showed remarkable sportsmanship too.  Entering their final game (undefeated as well)...they met the undefeated Washington Ice Dogs.  The level of competition was quite intense and spirited in a game that saw each team hold the lead at various times.
And, although the Komets lost the game on the scoreboard (8-5)....they proved that sometimes the team that LOSES looks like the WINNERS...through their on-ice actions.  Our boys were able to display an incredible amount of respect and sportsmanship in that defeat....and we are all so proud of them for representing Peterborough so well.
And so...we've packed up our memories in equipment bags for another season - - with the anticipation of creating even more special moments next year - - as the Kawartha Komets continue to “blaze a trail” in special needs hockey."

O. K.  Click here to watch this "moving moment".  One of our coaches, Sean Quinlan, captured this on videotape and the number of views on YouTube is going to be phenomenal. This is what Special Hockey International is all about!

Scribbled & posted by David Warren Fisher at Wednesday, May 04, 2011