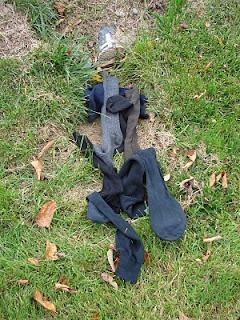 Next to explaining the biblical doctrine of the Trinity, perhaps the biggest mystery of the past hundred years relates to the unexplained disappearance of millions of odd socks.

It's never a "pair" that gets stuck in the washing machine.  Never an old, holy pair, it's always a single sock...half of that new pair that fit so well and felt so comfortable.

Where do they go?  Nobody knows!  Do they holiday somewhere in the laundry room then reappear when the vacation is over?
Two weeks ago I went through my sock drawer and threw out about 12 odd pieces of footwear.  Why keep them?  Their mates have been separated or divorced for months or years.  I suppose I could have used them to polish my shoes but, no, I just pitched them in the trash.
I kept expecting Carol to emerge from the laundry room one day with an armful of socks that had suddenly been extracted from the dryer or dislodged from the sump pump.  But no...that never happens.
But this week, when I went to cut the grass...the mystery was solved. There's a drain than runs underground from the basement of the house to the front ditch by the road.  What did I find lying there in the culvert?  Odd socks!  A little worse for wear.  They lay there perplexed, wondering where their partners had taken off to.
To verify my findings I went to the ditch with my trusted SONY.  My next door neighbour "happened" to be closeby so I had to explain.  Weird?  Yes!  Embarrassing?  Not for me but when I told Carol...now that was a different story.
Now that the second biggest mystery has been solved I will continue to work on the "Trinity" one.
By the way, one of the most appealing aspects of our Christian faith is the inherent "mystery".  Were we to know everything and be able to explain every point, what joy would we experience in our many discoveries?
"Beyond all question, the mystery of godliness is great:  He appeared in a body, was vindicated by the Spirit, was seen by angels, was preached among the nations, was believed on in the world, was taken up in glory." - 1 Timothy 3:16 (NIV)
Just a thought!
Scribbled & posted by David Warren Fisher at Saturday, September 18, 2010