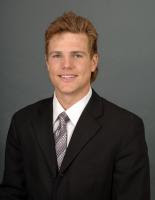 My nephew, Bud Fisher, plays goal for the Quinnipiac University Bobcats. Needless to say I'm very proud of him.

The following information was taken from the Bobcats' web site:
As a Sophomore in 2006–07:
Appeared in 39 contests...Recorded a 20–14–5 mark for the Bobcats...Registered three shutouts...ECACHL All-Tournament Team selection...An ECAC Hockey League All-Academic team selection...Made a career-high 43 stops in the win over Robert Morris on 10/13...Named ECACHL Goalie of the Week on 10/16...Stopped 53 of 56 shots over the weekend sweep of Colgate and Cornell on 11/17-11/18...Stopped 23 shots to earn his third career shutout at Princeton on 1/6...Made 17 saves in the win over Brown on 1/12...Made 24 saves to earn the win at Colgate on 2/17...Stopped 42 of 44 shots in a quarterfinal round sweep of Cornell on 3/9-3/10...Turned away all 23 shots he saw in 3/9 contest...Named ECACHL Co-Goalie of the Week for his performance against Cornell....Registered his fourth shutout of the season and sixth of his career against St. Lawrence in the ECACHL semifinals on 3/16...Tied an ECACHL tournament record with his third career playoff shutout with the St. Lawrence blanking.

Before Quinnipiac:
Identified by the National Hockey League’s Central Scouting Bureau as a draft prospect in early 2005...Played two seasons with the Lindsay Muskies (Ontario Jr. A) club...Played in 42 games between the pipes in 2004–05.

Personal:
Born in Peterborough, Ontario...Son of Karen and Jim Fisher...His older brother, Mike, currently plays with the Ottawa Senators of the National Hockey League...Plans to major in business.