Through Cards, We Can Care More 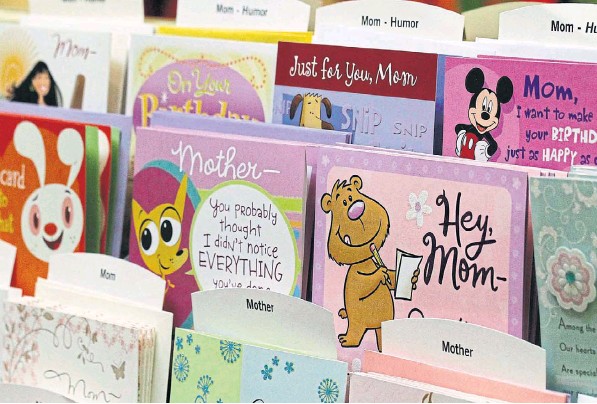 I can attest to the value of sending cards...especially when friends and loved ones are hurting or grieving. My 30 plus years of sports chaplaincy was launched by a card and letter writing ministry...Epistle Sports Ministries.  1,000's of cards were sent to encourage athletes.

The following article is a clarion call for us to return to an oft-forgotten and much-neglected art. Send a card today!

Through Cards, We Can Care More by Kate Carraway

When my husband Simon’s mother died, we received two deliveries almost right away: a basket tumbling with fruit from friends of mine and a flower planter from my parents that was so heavy I couldn’t lift it by myself, and laughed instantly, thinking of my mom on the phone with a florist, telling them to go bigger, no, bigger than that. We also got two cards, one from my cousin, who my husband had at that point never met, and one from my sister.
Unlike online messages, cards don’t demand a reply from someone who is already preoccupied with grief, Kate Carraway writes.
There was a suited cache of friends, from my husband’s rec hockey team and from his office, who drove six hours on a weekday to the funeral, to huddle together and trade practised collegialities in low voices. My husband gave the eulogy. “Nailed it,” he said after.
There was also a fast and steady flow of condolence emails, texts and Facebook messages. Two cards, though. What I noticed about that is how much I noticed. That so few people had mailed him a card made me sad and privately hysterical. Did his friends have our new address, 10 months after Simon had moved out of the apartment he had lived in for 10 years? No. Does my generation observe condolence cards (corny and hideous, tucked into some recess of a bookstore, and then the stamps and mailboxes, a long problem of esthetics and logistics) as a defining mourning ritual? Definitely not. Did I care? No.
Some of what I was feeling was the natural overreaching that comes with loving someone in pain, unprotectable. Simon didn’t need any cards, didn’t notice, didn’t care. His friends materializing at the funeral meant more to him, by far, and more to me. Still, two cards. Our mailbox became the scene of some quiet but shocking crime, evidence in absentia of this new world and its tolerance of what’s the easiest, most obvious, most convenient thing to do, and the subsequent and growing resistance to making an effort when making little to none is just what’s done.
The most useful thing to offer when someone is grieving, or celebrating, is acknowledgment: “I see it,” or really, “I see you.” When I was growing up, paper snowdrifts of cards marked birthdays and holidays, thank-yous for dinner parties and gifts, condolences for losses, all of them propped up on the mantel, for a while, totems of friendship. The various pings, instead, get lost in swampy inboxes, where daily life is barely interrupted by the “I’m so sorry’s” or whatever. Online messages ricochet, inviting a reply, even implicitly, and shifting the onus, sometimes callously, to whoever is already preoccupied with whatever’s just happened. A card, though, lands in real space and time, pulling the event and the attendant feelings into a higher and less familiar realm, where things are more important than just “Send.” A card mediates real and online life in a way that nothing much else does.
During my two-card hissing fury, I catalogued my friends’ recent triumphs and losses, and realized — like “Ooooooh” — that I hadn’t sent a card, or sent flowers or dropped something off, maybe half the time. I had thought my texts and emails and DMs had been enough, sometimes — and I drop an email or a text easily, always — because when you’re the one just outside of the happiness or sadness, it can feel like enough, like you’ve done something real. I also sometimes feel, when I send holiday and thank-you cards, like I’m overdoing it, because, I tell myself, if they cared about it, they’d do it too, and they don’t.
Except, I don’t think that’s it. I think it’s too embarrassing to admit to wanting gestures such as cards, even presents, as if they were ever about the thing itself instead of the intention, the “I see you.” I want people to care more, and to show their care more. I want my better angels to remind me, especially, that the sympathy and empathy I feel when someone else is in pain is not the end of my obligation.
There are so many times when we don’t know how to care for each other — I have failed so hard, and so often, to even perceive the pain that other people have been in — that it seems like we should jump on opportunities to care like barely metaphorical emotional grenades. Of all the ways to be let down, and to let people down, this is one we can fix.
Scribbled & posted by David Warren Fisher at Tuesday, June 26, 2018