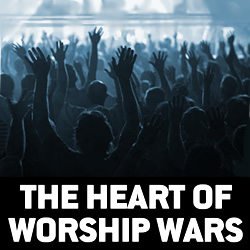 Recently my friend Paul Wilkinson posted the following article on his Thinking Out Loud blog.  I thought it should be re-posted here.  Thanks, Paul!

"When I looked to my right, there was Brett.

He looked angry. The worship leader had chosen a classic hymn, “A Shelter in the Time of Storm.” Brett doesn’t care for the hymns. Even though he’s the standby guitarist for three of the four worship teams, when a hymn comes along he doesn’t sing. Even the revamped versions of “When I Survey” and “Amazing Grace” don’t work for him. He just stands there with his lips pursed together.
When I looked to my left, there was Daniel.

He looked distressed. We’d moved on to a different song now, introducing the new modern worship Chris Tomlin song, “White Flag.”  Daniel is a retired school teacher. He gave up his NASB for a more modern translation, but he’s not giving in an inch when it comes to all the new songs we’ve been learning lately. So he stands stone-faced, silent, with his lips pursed together.

When I looked up, there was God.

I think he delights in the worship of this church, because I think beyond the songs, beyond the way the guy at the back mixes the band and the singers, beyond the misspellings in the projected lyrics; this is a congregation that really wants to give back to Him something in worship. And I think he appreciates that those in leadership do their best to find vehicles that allow people of different generations to express the heart overflow of their love for Him.

But He would really like to see everyone joining in.

He’s looking for a people who will corporately join in the song.

Who want to join in the song.

Who will raise the white flag of surrender to Him and extol His sovereignty as “a rock in a weary land, a shelter in the time of storm.”

He wants you to join in the song."
Scribbled & posted by David Warren Fisher at Wednesday, March 14, 2012