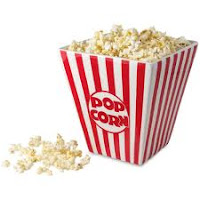 My friend Greg Asimakoupoulos can take something as simple as popcorn and write about it in such a way that you have to go and pop some.

Where does that guy get his ideas?

His mom should have called him "Cracker" Jack!
Check out Greg's "stuff" here.
Fiber with a Flair
A popcorn lover's tribute to his favorite nightly snack

Popcorn is my favorite snack.
It's fiber with a flair.
The calories are next to none.
It's just like eating air.

From way back when I was a boy
(you'll probably think it odd),
I thought of popcorn manna-like.
A daily gift from God.

That Jiffy Pop was quite the rage
until I finally learned
that lest you shake that tin pan fast,
the corn is bound to burn.

The hot-air kind was healthier.
That's how it was made known.
But it was dry as cardboard puffs...
like chewing Styrofoam.

I make it the old-fashioned way.
A kettle on the stove.
Then pour the oil, add the corn
and wait till they explode.

But yellow kernels aren't my thing.
I only like the white.
A little butter and some salt.
Let's pop some up tonight.
And here's my (David's) little postscript:


Yes my friend Greg can really write,
I wish I had his touch;
He takes something like popping corn
Turns "nothing" into "much".
Scribbled & posted by David Warren Fisher at Friday, April 01, 2011