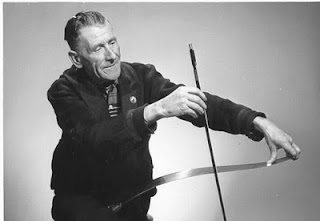 A good friend of mine travels extensively training Christian leaders in many foreign countries where the gospel cannot be preached openly.  He recently shared the following story which is quite humorous.  My friend John can make beautiful music by running a bow (as in violin) over the non-serrated side of a carpenter's saw.  (That is NOT John in the photo). I've heard him and he's GOOD.
Here's John's story:
An airport that I just went through screens everyone who enters the place, as well as doing a secondary screening of the passengers prior to getting on the airplane. Consequently I stirred up a bit of dither and delay when a carpenter’s saw in my suitcase showed up on the security official’s radar. They promptly had it out and began waving it around in great consternation. I had time to spare and didn’t care, so I just stood aside and let them jabber and speculate endlessly about why anyone would pack such dangerous and threatening objects in their cargo. All their antics were unnecessary since this was prior to me getting to the ticket counter and sending the suitcase into the airplane’s hold. Besides, if they would only take the time to ask me, I was standing there with all the answers. Their blustering made me wonder if they thought I was going to hijack the whole airport instead of the customary planeload of passengers! I considered taking my musical instrument away from them and playing a tune to prove why it existed. Instead I decided to just placidly stand aside and smirk. Why should I deprive them of this occasion to break up the monotony of their day? Besides, if they hadn’t been so serious and concerned, I wouldn’t have enjoyed the event so much. Eventually after consulting any authorities they could find, and writing down all sorts of details from my passport, and anything else they could think of, they let me go. I guess they have me in their files now! So, now, I am a “T”!
In all their conundrums they completely missed observing the knife that I had inadvertently left quite exposed!
Scribbled & posted by David Warren Fisher at Tuesday, April 20, 2010