The Courageous Heart of Irene Sendler 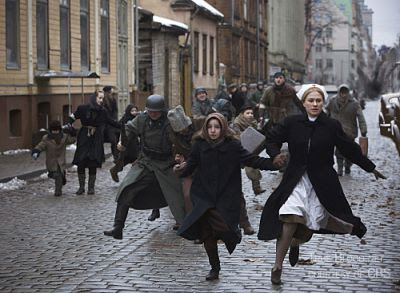 My favourite "made for television" movies are from the Hallmark Hall of Fame. Tonight their latest offering is being aired on CBS television at 9:00 p.m. EST.

Here's a press release from Hallmark concerning The Courageous Heart of Irena Sendler. Hope you can see it tonight! 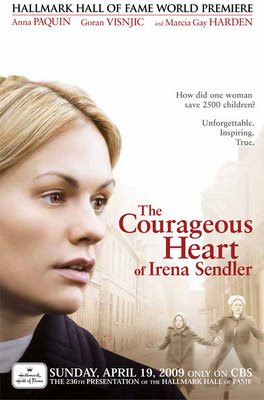 KANSAS CITY, Mo. (March 19, 2009) — The Courageous Heart of Irena Sendler, the 236th presentation of the Hallmark Hall of Fame, recounts the inspiring true story of the brave woman who helped save the lives of 2,500 Jewish babies and young children in the Warsaw Ghetto during World War II. Academy Award winner Anna Paquin (The Piano, True Blood) plays the title role; another Academy Award winner, Marcia Gay Harden (Pollock, In From the Night), plays her mother, Janina. Goran Visnjic (ER) is Stefan, a friend from Irena’s university days who helps Irena and her underground network map out strategies and routes to smuggle the children out of the ghetto.

Irena Sendler was a Catholic social worker, but used fake identification to pass herself off as a nurse, which allowed her to enter and exit the walled-off ghetto with relative ease. She used that advantage to mount the daring and dangerous operation to smuggle children to safety.

Finally, in 1943, the Gestapo arrested Sendler. She spent three months in captivity, undergoing interrogation and torture. She betrayed no one. After she was sentenced to death, a guard – bribed by the Polish resistance movement – freed her.

Irena Sendler was nominated for the Nobel Peace Prize in 2007, and died at age 98 in May 2008. While alive, she was never comfortable being singled out for special recognition. She always reminded people that smuggling and then protecting all those children represented a collective effort on the part of many brave souls, including couriers, nuns, priests and Polish families, to say nothing of the close-knit band of mostly women who were part of her underground smuggling network.

Anna Paquin researched the life and times of Irena Sendler before filming began in November 2008, in Riga, Latvia.

“She was extraordinarily strong,” Paquin says, “and extraordinarily modest. She had no sense of being in any way special or heroic. She was angry about what was happening to the Jews she knew personally, and the thousands more she didn’t know. She said the only way she could live through that terrible time was to do something. She felt she had no choice.”

Paquin continues, “When she was asked years later, ‘Weren’t you scared?’ she answered, ‘Yes – but my anger was stronger!’

“It speaks to her sense of mission and her sense of humility that for the rest of her life, looking back on those war years, she felt she hadn’t done enough.”

Marcia Gay Harden says Irena Sendler and her fellow smugglers weren’t the only individuals worthy of praise during that troubled time.

“Equally amazing, I think,” Harden says, “is the courage of the mothers and fathers who kissed their babies one last time and then parted with them, so they’d have a chance to live. I think everybody who sees this film will ask themselves if they would have had the courage to do that.”

The Courageous Heart of Irena Sendler is written by John Kent Harrison and Lawrence John Spagnola, based on the book The Mother of the Holocaust Children by Anna Mieszkowska.

John Kent Harrison directs. This is his sixth Hallmark Hall of Fame film; previous projects include William Faulkner’s Old Man, What the Deaf Man Heard and The Water Is Wide. Jeff Rice (The Watcher), Jeff Most (The Specialist) and Brent Shields (Front of the Class) are the executive producers. It is from Jeff Most/Jeff Rice Productions and Hallmark Hall of Fame Productions, Inc.