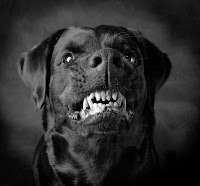 My friend Greg Asimakoupoulos writes knowingly about the Black Dog of Depression.

That dog bites me from time to time and it hurts. As Greg implies and I state...if you've never tangled with the dog...you might just think it's a cute puppy. IT'S NOT!!!

The Black Dog of Depression - Empathizing with those who have it...


The house pet Winston Churchill had
would drive him to the brink
He called the beast he walked each day Black Dog.
It bit him fairly often
and would leave him prone to tears
while calling out in heartfelt prayer to God

Abe Lincoln also knew these bites.
They forced him to his knees
Depression robbed him of his peace of mind
The demons of discouragement
possessed him to the end
You can see their traces in his forehead lines.

Black Dog's sharp teeth have bitten me.
I know the pain they cause.
The dark clouds of depression hid the light.
I withered in the darkness
without words to voice my grief
as I stumbled in the never-ending night.

Only those who've known this torture
can relate to such despair.
Depression's victims share a common plight.
But, thank God, there is an answer
in both therapists and prayer
and the Healer who helps lead us to the light.

* Churchill referred to his depression as "the black dog." Why not do a web search for famous people who battled clinical depression? I "hit the wall" in 1991 but benefited from a helpful therapist, a praying wife, a supportive congregation and a faithful God.