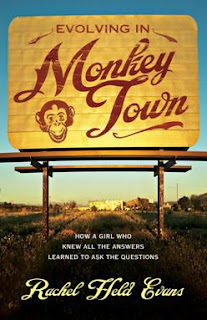 This morning I read this article by Rachel Held Evans.

Check out more about her at the end of the story.

I found myself silently uttering AMEN throughout Rachel's comments.

Rachel writes:
People sometimes assume that because I’m a progressive 30-year-old who enjoys Mumford and Sons and has no children, I must want a super-hip church—you know, the kind that’s called “Thrive” or “Be,” and which boasts “an awesome worship experience,” a fair-trade coffee bar, its own iPhone app and a pastor who looks like a Jonas brother.
While none of these features are inherently wrong (and can of course be used by good people to do good things), these days I find myself longing for a church with a cool factor of about 0.

Well, for one thing, when the Gospel story is accompanied by a fog machine and light show, I always get this creeped-out feeling like someone’s trying to sell me something. It’s as though we’re all compensating for the fact that Christianity’s not good enough to stand on its own so we’re adding snacks.

But more importantly, I want to be part of an uncool church because I want to be part of a community that shares the reputation of Jesus. Like it or not, Jesus’ favorite people in the world were not cool. They were mostly sinners, misfits, outcasts, weirdos, poor people, sick people and crazy people.
Embracing the Distractions
Cool congregations can get so wrapped up in the “performance” of church that they forget to actually be the Church, a phenomenon painfully illustrated by the story of the child with cerebral palsy who was escorted from an Easter service for being a “distraction.”

It seems to me this congregation was distracted long before this little boy showed up. In their self-proclaimed quest for “an explosive, phenomenal movement of God—something you have to see to believe,” they missed Jesus when He was right under their nose.

Was the paralytic man lowered from the rooftop in the middle of a sermon a distraction?

Was the Canaanite woman who harassed Jesus and His disciples about healing her daughter a distraction?

Were the blind men from Jericho who annoyed the crowd with their relentless cries a distraction?

Jesus didn’t think so. In fact, He seemed to think they were the point.
Jesus taught us that when we throw a banquet or a party, our invitation list should include “the poor, the crippled, the lame and the blind.” So why do our church marketing teams target the young, the hip, the healthy and the resourced?
We Are All Uncool
In Bossypants, Tina Fey describes working for the YMCA in Chicago soon after graduating from college. This particular YMCA included, “a great mix of high-end yuppie fitness facility, a wonderful community resource for families and an old-school residence for disenfranchised men.” Fey shares a host of funny stories about working the front desk. One such story involves one of the residents forgetting to take his meds, bumping into a young mom on her way to a workout session and saying something wildly inappropriate. Fey writes: “The young mother was beside herself. That’s the kind of trouble you get when diverse groups of people actually cross paths with one another. That’s why many of the worst things in the world happen in and around Starbucks bathrooms.”

Church can be a lot like the YMCA—or a Starbucks bathroom.

The truth is we’re all guilty of thinking we’re too cool for the least of these. Our elitism shows up when we forbid others from contributing art and music because we deem it unworthy of glorifying God, or when we scoot our family an extra foot or two down the pew when the guy with Asperger's sits down. Having helped start a church, I remember hoping our hip guests wouldn’t be turned off by our less-than-hip guests. For a second I forgot that in church, of all places, those distinctions should disappear.

Some of us wear our brokenness on the inside, others on the outside.

But we’re all broken.

We’re all in need of a Savior.

So let’s have some distracting church services—the kind where Jesus would fit right in.

Rachel Held Evans is the author of Evolving in Monkey Town: How A Girl Who Knew All the Answers Learned to Ask the Questions (Zondervan, 2010). She blogs at http://rachelheldevans.com.
Scribbled & posted by David Warren Fisher at Monday, July 04, 2011